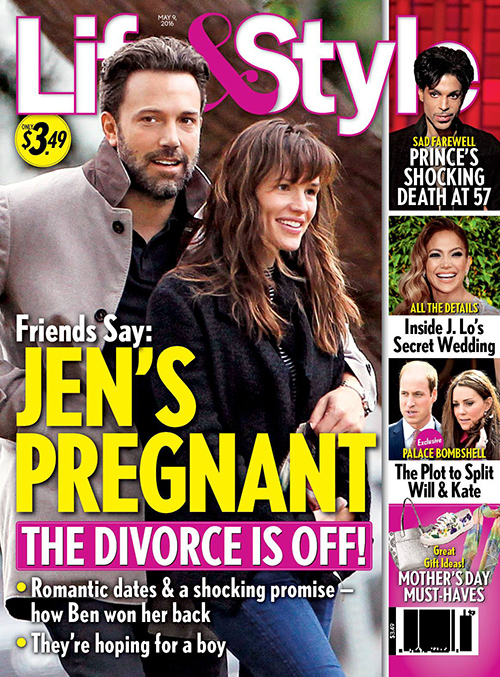 Is Jennifer Garner pregnant with baby number four? Despite the fact that Jennifer Garner and Ben Affleck announced their divorce and split last year – the couple hasn’t made much progress legally in their separation, and are still very much married. According to the latest cover of Life & Style Magazine, Jen and Ben actually called off their divorce, and are making one last ditch attempt to save their troubled marriage, because Jennifer is pregnant with baby number four.

This week’s cover of Life & Style features a photo of Jen and Ben appearing very happy. The headline reads in bold print: “Jen’s Pregnant – The Divorce Is Off!” The front page goes on to tease inside details on how Ben Affleck won back his wife Jennifer Garner, and we’re hoping he pulled out ALL of the stops after that embarrassing Christine Ouzounian cheating scandal. Oh, and the Affleck Family is hoping for a baby boy this time around.

According to Life & Style Magazine’s inside sources close to the couple, Jennifer Garner and Ben Affleck have called off their divorce, and Jen’s pals are certain it is because she is pregnant with her and Ben’s fourth child. One source explained to the tabloid, “Their friends are expecting an announcement very soon that Jen is pregnant.”

Jennifer Garner and Ben Affleck’s divorce is definitely taking longer than it should, and we totally agree that it seems like they haven’t made much progress. So, there is a chance that the couple has put the split on hold – but that doesn’t necessarily mean Garner is pregnant. Although, if she is, congrats to the couple. Hey, a baby saved Megan Fox’s marriage from divorce. Maybe it will work for Jen and Ben too!

What do you guys think? Is there still hope for Jennifer and Ben, or is it just a matter of time before the divorce is finalized? Do you believe there is a baby on the way? Share your thoughts in the comments below!