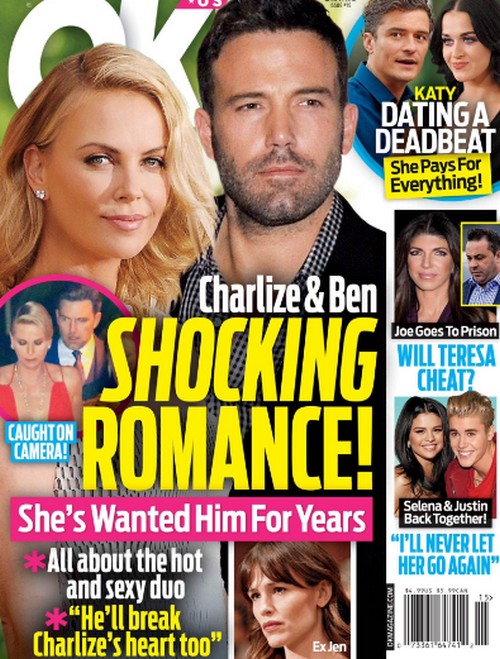 Jennifer Garner might be devastated that Ben Affleck and Charlize Theron have renewed their romance that allegedly began on the set of Reindeer Games in 2000. Charlize and Ben reportedly had great chemistry between Charlize and Ben from the moment they met. Guess Jennifer Lawrence will have to wait her turn!

Ben and Charlize have never been single at the same time until now. Charlize was in a serious relationship with musician Stephan Jenkins and Ben was on-again-off-again with Gwyneth Paltrow when the Reindeer Games co-stars came in contact the first time.

That all changed at the Vanity Fair Oscars party an insider revealed to OK! Magazine recently. “[Ben and Charlize] could finally flirt freely, and it was electric.” The flirting was kept subtle though, maybe because Jennifer Garner was at the party also and Ben didn’t want to embarrass his ex-wife any more than he has already?

Don’t expect to see Charlize Theron and Ben Affleck out and about with any romantic relationship. More than likely the new couple will either hang at Charlize’s home which is tucked away in Hidden Hills or head to quiet places away from Hollywood where they won’t be noticed.

Ben and Charlize need to tread carefully if Academy award winners move forward as a couple because it could confuse their children if Ben and Charlize take things too quickly. Ben has three children with Jennifer – ten-year-old Violet, seven-year-old Seraphina and four year old Samuel. Charlize has two children whom she adopted – four-year-old Jackson and a baby girl named August.

Charlize may want to be wary of Ben’s penchant for partying and gambling. As previously reported Ben may be millions of dollars in debt because of his gambling and that Ben often drinks so heavily he blacks out.

It did seem that Ben was trying to win Jennifer Garner back by taking his estranged wife out for romantic dinners. But Ben’s hope for a reunion might have ended after Jennifer’s interview with Vanity Fair. Jennifer called her estranged husband the love of her life, but the actress also revealed that Ben can be a cold and selfish man.

Charlize may not tolerate Ben’s selfishness. Either Ben Affleck will need to change or Charlize Theron will need to accept him as is. That may not be a problem. Charlize dated Sean Penn for about a year and Sean is infamous for having serious anger management problems. Maybe Ben is exactly what Charlize wants in a man.

Jennifer Garner stops to purchase a drink in Brentwood, California after enjoying a workout on March 29, 2016 by FameFlynet