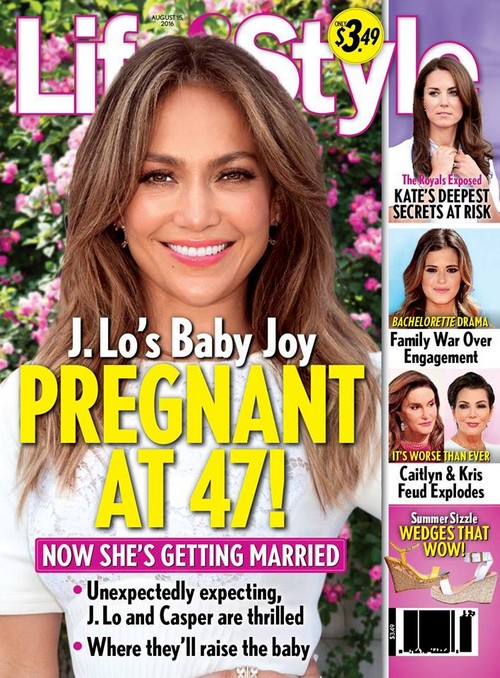 Jennifer Lopez is rumored to be pregnant with boyfriend Casper Smart. According to the latest cover of Life & Style, the 47-year-old international superstar and boyfriend, Casper Smart, are expecting their first child. Although the couple is reportedly happy in their relationship, claims of a J.Lo pregnancy are dubious at best.

First of all, Jennifer Lopez’s rep told ABC News earlier today that the singer is not pregnant. Second, J.Lo already has two children and, considering her age, would be unlikely to want to have any more.

Twins Emme and Maximilian were born to the star and her then-husband Marc Antony in 2008 and keep the star plenty busy. Third, Jennifer Lopez is in the middle of several important projects at the moment, including filming Shades of Blue and doing promotional appearances and interviews for her movie Ice Age: Collision Course as well as her song with Hamilton star Lin-Manuel “Love Make The World Go Round.”

The star is a self-admitted workaholic and is constantly working on new projects both in music and in film. Between tackling numerous projects at once and traveling to promote her work, J.Lo simply doesn’t have time to have another child.

On the other side of the pond, the cover of Life & Style also points to trouble brewing between Kate Middleton and Pippa Middleton’s future brother-in-law. Sources claim that Kate Middleton is unhappy with Pippa Middleton’s engagement because of concerns that James Matthews’ brother Spencer Matthews will sell royal family secrets to the paparazzi in another desperate bid for fame.

Spencer Matthews is less than an ideal relative for Kate Middleton. Spencer is a dubious reality star, steroid addict, and womanizer who claims to have slept with over 1,000 women. His inclusion into the royal family’s tight circle and the potential scandal he would cause would be akin to Fergie on, well, steroids.

Jordan Rodgers and Aaron Rodgers have been feuding for some time; Aaron Rodgers’s girlfriend Olivia Munn is rumored to be the cause of the discord. With the brothers at war, it is unlikely that Olivia Munn will be asked to be JoJo Fletcher’s bridesmaid anytime soon.

No gossip roundup would be complete without a healthy dose of Kardashian-Jenner catfights. The Kardashian family is no stranger to drama, especially when it comes to matriarch Kris Kardashian and her estranged partner Caitlyn Jenner. It appears that their long-standing feuding has come to a head over recent events, making the possibility of the two having an amicable co-parenting relationship unlikely.