Jodi Arias Prison Wedding: Will Marry Behind Bars – Vows To Have Baby With New Husband 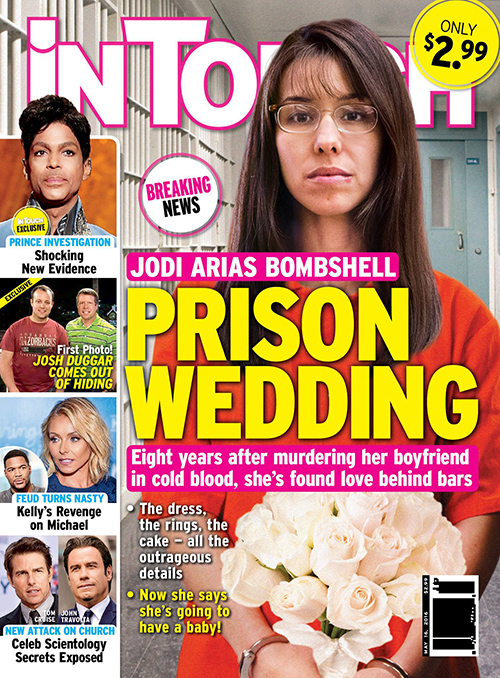 Convicted murder Jodi Arias is planning a wedding, if the latest reports from inside the Arizona prison are correct. And, Jodi wants to have a baby with her new husband. Jodi was sentenced to life in prison without the possibility of parole. Arizona does not allow conjugal visits. How in the world is any of this possible?

The most recent cover of In Touch Weekly reveals Jodi has found love while sitting in a prison cell. There are a lot of men out there writing love letters to the woman who was convicted of killing Travis Alexander. We’re sure that the majority of those letters contain marriage proposals. It’s possible Jodi fell in love with one of her prison pen pals.

If there’s even the slightest possibility Jodi can get married in prison it isn’t going to be the wedding of her dreams. An insider claims Jodi’s planning an outrageous shindig complete with a white wedding gown, a beautiful cake, and an exchange of wedding bands. Jodi Arias is living in a fantasy world, but that’s nothing new.

Maybe it’s one of the guards at the prison that’s fallen in love with Jodi and proposed marriage. If that’s the case, we’re sure the corrections officer and the convicted murder can find a quiet place for their wedding night. Could be a dark corner somewhere or Jodi’s new husband could sneak into her cell after lights out.

Even if the Arizona prison system allowed Jodi to marry and somehow she could slip off for a wedding night quickie, no one in their right mind will let Jodi keep the baby. The innocent child would be spirited away moments after Jodi gave birth and placed into foster care.

Jodi Arias wants to get married and wants to have a baby. Isn’t that something she should have thought about before stabbing Travis Alexander nearly 30 times? If Jodi had just accepted that the relationship with Travis was over and moved on, she could be someone’s wife and mother already.