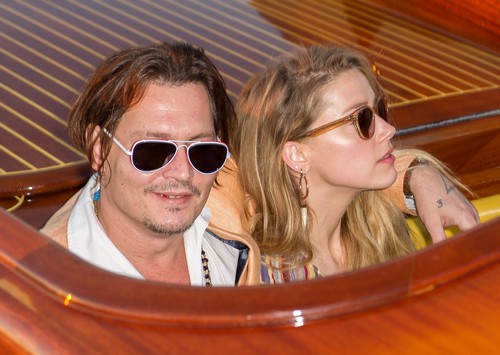 According to Depp’s rep, “Following Amber Heard’s announcement that her divorce settlement was to be divided equally and gifted to Children’s Hospital of Los Angeles and the American Civil Liberties Union, two exceptionally deserving and important charities, Johnny Depp has sent the first of multiple installments of those monies to each charity in the name of Amber Heard, which when completed will honor the full amount of Ms. Heard’s pledge.”

Now Amber Heard is lashing out, accusing Johnny Depp of bypassing her in order to claim the tax deductions on the money, and claiming that, because of the future tax deductions, he now owes double. She is also demanding that he turn over the full amount she promised in one payment, instead of payments in a series of installments as he began doing this week.

Amber’s reps state that “If Johnny wishes to change the settlement agreement, we must insist that he honor the full amount by donating $14 million to charity, which after accounting for his tax deduction, is equal to his $7 million obligation to Amber.”

This newest argument over Johnny donating the money directly to charity on behalf of Amber, seems to cast serious doubt on her intentions to donate the money as she promised. Or, she is just upset that instead of her being able to claim the tax deduction—which she undoubtedly would, in part to offset her massive legal fees—Depp will be able to claim the deduction himself.

Considering the numerous claims that Amber Heard was using Johnny Depp for his money all along, pitching a hissy fit over him fulfilling her wishes is definitely shady. It seems that her real intentions were to get her hands on the money and then “forget” about her donation promises.

Do you think Johnny Depp did the right thing by donating directly to charity or should he have given the money to Amber Heard first? Is it fair that Amber is now claiming that Depp owes double? Tell us what you think in the comments below!