Jonah Hill Weight Problems: Actor Keeps Pounds On Because Hollywood Demands It For His Sidekick Roles? 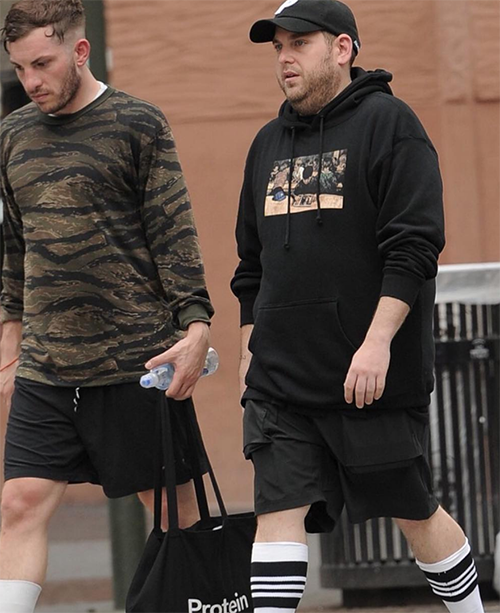 Jonah Hill’s weight is a cause for concern for the actor once again. In fact, there’s new speculation that Jonah Hill’s health might be in crisis because of the extreme pressure Hollywood filmmakers put on him and his looks.

According to one fitness expert, Jonah Hill’s yo-yo dieting and his extreme weight loss/ weight gain is definitely putting a toll on the actor’s health. Insiders believe that Jonah Hill is only in demand as an actor whenever he’s overweight, causing him to make questionable decisions about his lifestyle and eating habits, which, as a result, might lead to some major problems.

Fitness expert Bianca Jada, who has no professional or personal association with Jonah Hill, tells Naughty Gossip, “I blame money for Jonah getting fat. I just think that Hollywood puts that pressure on him and he is more valuable fat than thin.”

While there’s no arguing that Jonah Hill has found more success as an overweight actor than he has as a thin one, there might be other reasons why the actor’s weight has been out of control. Jonah Hill has had a string of box office hits, including ‘Moneyball,’ ‘Django Unchained,’ ‘The Wolf of Wall Street,’ ‘War Dogs,’ and so many more. Unlike his other Hollywood contemporaries, Jonah Hill is making movies with Hollywood’s A-list by starring in films opposite Brad Pitt, Jamie Foxx, Leonardo di Caprio and so many more. There’s a good chance that Jonah Hill knows that he can’t compete for the leading male role with good looking stars like Brad Pitt or even George Clooney for that matter and that’s why he’s learned to settle for the supportive role whenever he can.

Jonah Hill knows that he’s on the right path when it comes to his Hollywood career and he doesn’t want to mess things up by either shedding his image as the harmless, slightly overweight sidekick than transforming himself into an A-list stud. It might have worked for Chris Pratt, but it’s not guaranteed that it will work for everyone, and Jonah Hill knows that.

Plus, Jonah Hill isn’t the kind of person who’d rather hit the gym than the local bar with his friends. In fact, it’s quite the opposite. Jonah Hill has on more than one occasion been spotted drinking out in public and has even confessed to drinking beer and smoking weed during his college years. One of the reasons why he lost weight back in 2011 was because he cut alcohol and drugs out of his life. Unfortunately, though, Jonah Hill has made more bad decisions than good, as his weight has ballooned back to where he used to be during the peak of his weight gain.

Tell us CDL readers, do you think Jonah Hill is being pressured to stay overweight rather than thin? Does Hollywood like Jonah Hill fat rather than skinny? Let us know what you think in the comments section below.