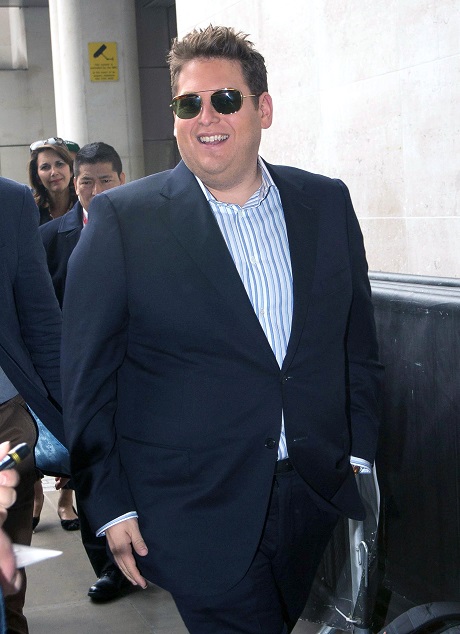 Jonah Hill continues to put his foot in his mouth, proving that being talented doesn’t necessarily equal being smart in the movie industry. Just days after making the homophobic slur and apologizing on national television, Jonah is now perpetuating stereotypes of Jewish people as gross or geeky.

On Late Night with Seth Meyers, Jonah joked about his 22 Jump Street co-star Channing Tatum, explaining, “We literally look and act like we’re from different planets. He’s from Planet Hot, and I’m from Planet Jew.”

Yeah, see, the only problem with that theory is that there are plenty of hot Jewish men in Hollywood that women have regularly swooned over. For example, Paul Newman was Jewish, and there was no one hotter in Hollywood than Paul Newman. So what’s with the ‘Planet Jew’ comments, Jonah?

Just because he doesn’t fit into the traditional leading type stereotypes in Hollywood, that doesn’t mean that he can continue to diss an entire section of society because he wasn’t considered ‘cool’ in high school.

Seriously, Jonah, the reason that you and Channing act like you’re from different planets is your attitude. Channing is rumored to be one of the nicest people working in Hollywood, and yet we keep hearing about Jonah’s temper tantrums and diva behavior. Sure, Jonah may be a little overweight and Channing may be more objectively attractive, but in the end, it all comes down to what you make of the situation. Jonah clearly can’t do that, and thus he’s taken to lumping in everyone from ‘Planet Jew’ along with him.

Talk about unfair, no? He’s insinuating that everyone who’s Jewish has been beaten by the ugly stick, when it couldn’t be further from the truth. What, can’t ‘Planet Hot’ and ‘Planet Jew’ overlap? First of all, has Jonah even taken a look at Natalie Portman, who is just one of many, many attractive Jewish actresses and actors working in Hollywood right now? He’d have to be blind to ignore all these factors, but then again, this is Jonah Hill that we’re talking about — the guy who ‘accidentally’ used a homophobic slur against the paparazzi.