Julia Roberts and Danny Moder Divorce: Longtime Couple Splits, $250 Million Fortune At Stake – Who Gets Custody of The Kids? 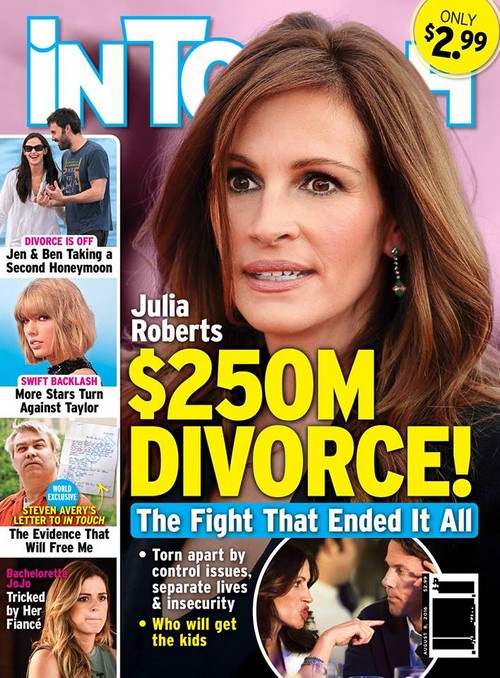 It’s no secret that Julia Roberts and her husband Danny Moder’s marriage has been on the fritz for years, but according to this week’s cover of In Touch Magazine, the long time couple has finally called it quits and has filed for divorce.

Rumors of a Julia Roberts and Danny Moder split have been plaguing the media for months now and don’t seem to be dying down any time soon, it appears that the 14 year marriage may finally be over for good.

This week’s cover of In Touch features a photo of Julia Roberts, the bold headline screams, “$250 Million Divorce!” The cove of the tabloid goes on to tease, “The Fight That Ended It All: Torn Apart By Control Issues, Separate Lives, And Insecurities.”

Julia Roberts and Danny Moder recently took a trip to Hawaii together, which according to insiders was to try and repair their troubled marriage. However, while vacation in Hawaii, all hell broke loose, and Roberts and Moder got in their biggest fight EVER.

In Touch reveals, “It was the fight that ended it all: After years of ups and downs, Julia and Danny’s 14-year marriage is in crisis once again and barreling toward a divorce — and a fight over her $250 million fortune.”

An insider dished to In Touch, ““They still love each other and there’s a possibility they could reverse course, but the outlook is bleak. Julia is praying that they can somehow work things out and stave off a pricey divorce. But right now, a divorce is imminent.”

There is no doubt in anyone’s mind at this point that there ae some serious issues at the Moder-Roberts house. But, will the couple of 14 years actually file for divorce? Julia and Danny have children together, and have built an entire empire over the past decade.

If the couple were to actually legally file for divorce, it could take years, and would be a financial nightmare. The couple may split, they could be split up right now, but will they ever go through the hassle and legal nightmare? Probably not …

What do you guys think? Will Julia Roberts and Danny Moder file for divorce? Share your thoughts in the comments below!