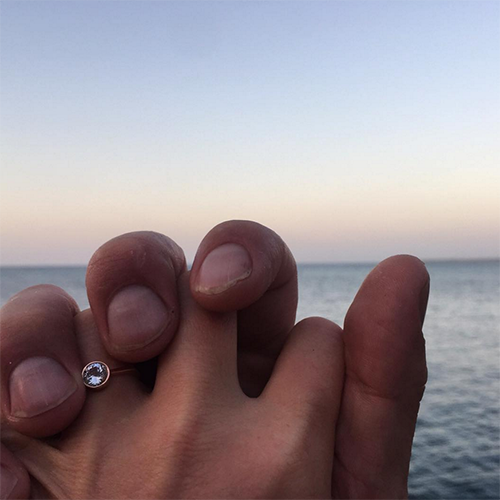 Misconduct star Julia Stiles is officially engaged to her new boyfriend, Preston J. Cook. Julia had herself an incredible Christmas – her now fiancé finally popped the question! On Christmas Eve, Julia Stiles‘ boyfriend proposed and she accepted. Her engagement ring isn’t one you see everyday. I think that’s why I like it so much.

The picture of the simple solitaire ring on her finger made for the “Best Christmas Ever” for the elated actress. The happy couple spent the holiday on vacation in Ilha Grande, Columbia. Nice presentation, Preston!

You probably don’t know all that much about Julia Stiles’ guy since he’s not a mainstream actor or even a celebrity for that matter. He’s a camera assistant that stole her heart. The two lovebirds became a couple back in July. Prior to their relationship, Julia was with State of Affairs actor David Harbour.

Let’s not get too judgy either peeps! Sure this is a pretty quick engagement, but ya know what? Some of the longest lasting marriages came from quicky engagements as well as those long term relationships turned marriage turned divorce. I believe in true love and everyone’s right to genuine happiness, and that’s exactly what Julia Stiles found with her man. A big congrats to the very happy couple!

So amongst wedding planning, what is up next for Julia Stiles in the wide world of film? She will be coming back as Nicky Parsons for the latest (5th) installment of the Bourne movies and I cannot tell you how stinkin’ excited I am for this one… happy dance over here! Look for more details on that in the future. The movie is set to release this summer (July 29th.)

In the meantime, check her out next month (February 5th) in Misconduct, where she will star alongside the likes of Anthony Hopkins, Al Pacino, and Malin Akerman. This one will have you stressed out and trying to calm your nerves with an extra glass of wine (at least that’s my method).

Anytime you mix up a lawyer taking on a powerful pharmaceutical company, corruption, and blackmail…pop an extra cork! You won’t want to miss this amazingly well cast film!