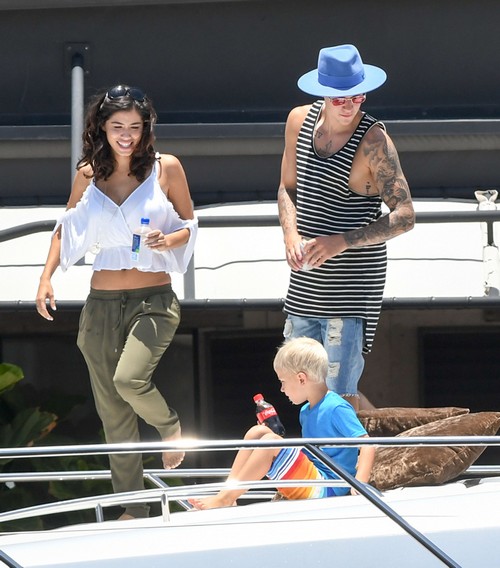 Justin Bieber was on his yacht today with a Selena Gomez look-alike. Justin Bieber’s yacht sure has been seeing a lot of action this week in Miami, where Biebs is taking a little vacation from his world tour. On Tuesday July 5 Justin Bieber was spotted on the boat with mysterious brunette, who looks an awful lot life his infamous ex-girlfriend Selena Gomez.

And, let’s just say that Biebs and Selena’s doppelganger looked like they were much more than “just friends.”

It’s unclear who the new mystery girl is in Justin’s life – and no one seems too interested in her name – the alarming part is HOW much she looks like Selena Gomez. Earlier this year Justin made one last half-hearted attempt to win back Selena, and it failed, so it looks like he settled for the next best things, a Selena Gomez body double.

Interestingly, Justin Bieber was just partying on his yacht with another one of his favorite girls Nicola Peltz, less than 48 hours ago. Nicola was nowhere in sight while Justin Bieber and the mystery brunette were hanging out.

Nicola Peltz most likely hopped the earliest flight home after she found out that Justin Bieber was sneaking around Miami with Kourtney Kardashian behind her back. It’s safe to say, whatever happens in Miami, does NOT stay in Miami.

So, who do you think the mystery girl is with Justin Bieber? Does he have another new girlfriend? And, is it just a coincidence that she looks like his ex Selena Gomez? Let us know what you think in the comments below!

Justin Bieber is seen spending his downtime from his Purpose World Tour on his yacht in Miami, Florida on July 5, 2016. Justin wake-boarded and enjoyed the views from his yacht with his baby brother Jaxon and friends. FameFlynet