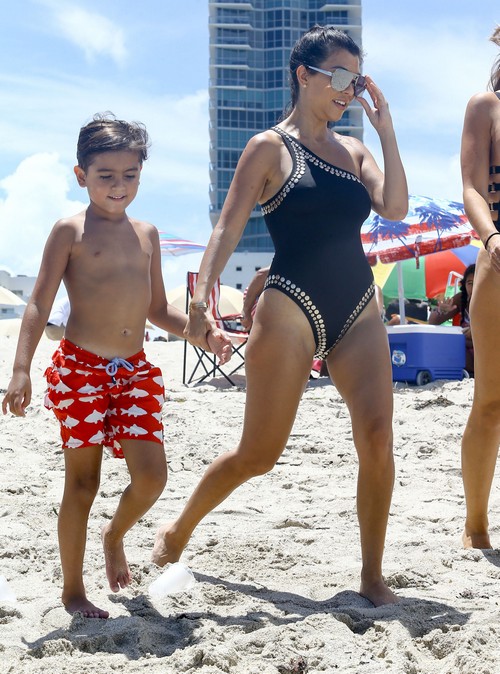 According to a report from US Weekly Magazine, Kourtney Kardashian and Justin Bieber were spotted partying in Miami at Story Nightclub in the wee hours of the morning. Eye witnesses revealed that Biebs arrived at the club around 12:30 and stepped in to the DJ booth, he left the booth around 1:00 AM and returned shortly after with Kourtney Kardashian by his side.

Kourtney Kardashian was wearing a skin-tight leather dress and danced with Justin Bieber and sang along to his songs from the booth.

Interestingly enough, Justin Bieber also has his rumored girlfriend Nicola Peltz in Miami with him over the long weekend. Justin and Nicole hit the ocean on a yacht together and were spotted soaking up the sun, looking very much like a couple.

Here’s to hoping that Nicola doesn’t have WIFI on the yacht, and doesn’t catch wind of her boyfriend’s extracurricular activities at the club with Kourtney Kardashian.

It’s great that Kourtney Kardashian is living it up and enjoying the single life after years in her hellish relationship with Scott Disick. But, you would think after all of the times that Scott cheated on her, she would be a little attentive to the fact that Justin has a girlfriend.

It will definitely be interesting to see how much longer Nicola Peltz hangs around Biebs now that he is canoodling with Kourtney Kardashian again. What do you think about Kourtney and Justin hanging out at the club? Are they hooking up again? Will Nicola cut Biebs loose? Share your thoughts in the comments below and let us know what you think!

Pregnant Kourtney Kardashian enjoys the 4th Of July on the beach with her kids in Miami, Florida on July 4, 2016. Kourtney was joined by Larsa Pippen, where the two took a dip in the ocean and posed for pictures with fans. FameFlynet

Justin Bieber and girlfriend Nicola Peltz seen relaxing on a yacht on the 4th Of July in Miami, Florida on July 4, 2016. Justin and Nicola have been spending a lot of time together during his downtime from his Purpose World Tour by FameFlynet