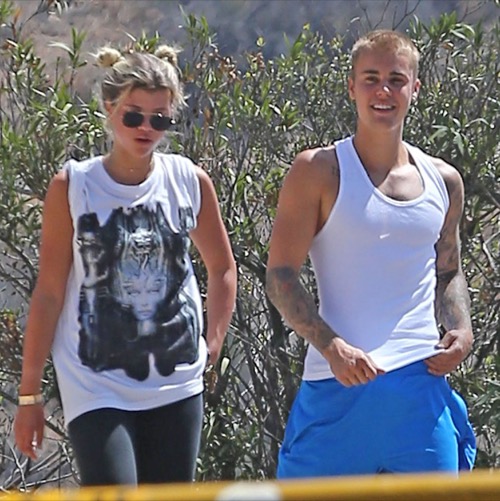 Sources tell TMZ that Selena Gomez has been trying to contact Justin Bieber ever since their Twitter feud earlier this week.  Justin Bieber, however, won’t accept Selena’s calls or acknowledge her attempts to apologize for calling him out over feuding with his fans and accusing him of cheating during their relationship.  In an attempt to redeem herself, Selena Gomez even went on Snapchat to apologize, calling her ranting “selfish and pointless.”

Bieber appears to be completely fed up with his ex, whose actions only prove her pathetic jealousy over his new squeeze, 17-year-old Sofia Richie.  Justin Bieber feels like his ex refuses to let go of their past relationship and is constantly finding ways to insert herself into his personal life.

The pop star has been showing love for Sofia Richie on his Instagram feed, sparking rumors that the two are getting serious.  Loyal Bieber-Gomez fans took issue with the pics of the new couple and lashed out at Sofia Richie on Bieber’s Instagram feed.  In response, Bieber issued a warning that he would delete his account if his fans didn’t stop the hate.  It was then that Selena Gomez chimed in, chiding him for feuding with his fans.

The two then got into a back-and-forth that culminated in each accusing the other of cheating during their relationship.  Afterwards, Justin Bieber fulfilled his threat and deleted his account.

Bieber makes a strong case for Selena Gomez being incredibly jealous of his new relationship, as she had no reason to chime in during his fan feud, or even to be monitoring what was going on in his life by stalking his Instagram account.  The star obviously hasn’t gotten over the Biebs and her obsession is not only making her look pathetic, but also ruining any chances she has of having a friendship with her ex.

The more Selena Gomez lashes out, the more she is going to cast Sofia Richie in a favorable light.  Perhaps Selena Gomez should focus on her own love life and put Justin Bieber’s romances in her rear-view.

What do you think about Selena inserting herself into Justin’s feud with his fans over Sofia Richie?  Will Justin Bieber ever forgive Selena Gomez? Will Selena ever get over Justin?  Tell us your thoughts below!