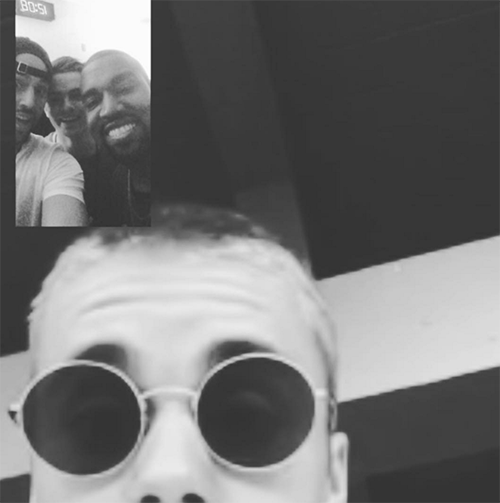 Justin Bieber has officially declared his loyalty to Team Yeezy in the latest Taylor Swift versus Kanye West and Kim Kardashian feud by posting a screenshot of himself with Kanye West on his Instagram account. He captioned the pic with “Taylor Swift what up,” according to Lainey Gossip. Ouch.

So why is the Biebs suddenly taking a break from fighting air pollution and turning down millions of dollars to perform at the Republican National Convention to throw shade at the pop singer? The long-standing Kanye West and Taylor Swift feud was reignited when the singer denied having given her permission to be included in Kanye’s new song “Famous.”

Unfortunately for her, Kanye, ever the megalomaniac, hires film crews to follow him day and night, and the crews caught the telephone conversation on tape. Sick of the public always pointing to Kanye as the bad guy, wife Kim Kardashian posted the tape online and ever since, Swift has been unable to “Shake It Off.”

Bieber has a history of friendship with the rapper as well as Kim Kardashian and the Kardashian family. Bieber was even romantically linked to Kourtney Kardashian earlier this year and has been seen hanging out with Khloe Kardashian and her crew around town. Is this just a classic instance of “bros before hoes” or is there an underlying reason that the Biebs has gotten catty?

Lainey Gossip suggests that the real reason for the Swift jab was because Taylor Swift reportedly disapproved of his now-defunct relationship with Selena Gomez. There have been rumors of an alleged Justin Bieber and Taylor Swift feud for years, starting back in 2013 when an image of Swift sticking out her tongue in response to Selena Gomez and Justin Bieber kissing at the Billboard Music Awards surfaced, according to E News.

Earlier this year, Justin Bieber posted a video of him lip-syncing to Taylor Swift’s “Teardrops On My Guitar,” which Swift “liked,” causing fans to believe the long-rumored feud was finally over. Today’s Instagram slam indicates otherwise.

If the Selena Gomez connection truly is to blame, he’s now getting even by piling on the ever-growing mound of celebrities who are turning their backs on the former pop darling. Everyone from Britney Spears to Katy Perry to Pretty Little Liars star Troian Bellisario have come out this week to diss Swift and legions of fans are suddenly starting to wonder if maybe Yeezy isn’t the one who is sleazy. Between celebs turning their backs on her, loyal fans abandoning her, and reports of her super-controlling #Hiddleswift relationship, the pop star has had a rough few weeks.

Do you think Justin Bieber’s slam will be the final nail in the coffin for Taylor Swift’s good girl image? Is he sticking by his friends or getting petty revenge for her hater attitude about his relationship with Selena Gomez? Let us know your thoughts in the comments below!