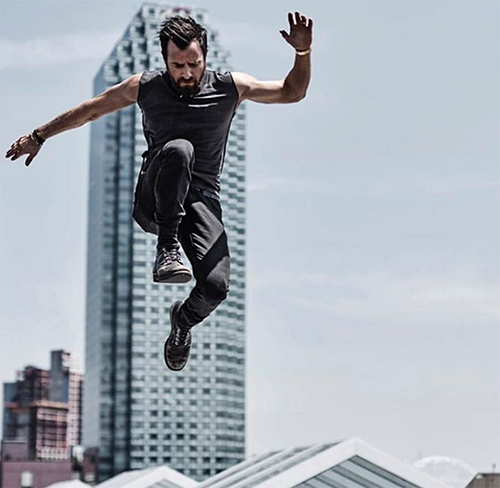 Justin Theroux hates talking about his personal life, yet he’s opening up about his marriage to Jennifer Aniston and her decade-long love triangle with Brad Pitt and Angelina Jolie once again. While promoting his latest movie, ‘The Girl on The Train,’ the Hollywood actor said that his wife Jennifer deserves more credit for putting up with all the gossip nonsense she’s been through throughout the years.

In a new interview with Britain’s Sunday Times, Justin, who married Jennifer in August of 2015 after an almost three-year engagement, had nothing but praise for the actress. She’s often been ridiculed and mocked in headlines for being ‘lonely Jen’ after her ex-husband Brad Pitt left her for Angelina Jolie back in 2005.

Angelina shockingly pulled the plug on her marriage to Brad weeks ago, and an all-out nasty fight and public smear campaign has ensued. Angelina’s sources have suggested that Brad not only has substance and alcohol issues, but that he might also be a threat to his six children’s well-being after a war of words broke out between him and his 15-year-old son Maddox on a flight from Paris to Minneapolis last month.

Speaking about how Jennifer deserves a medal for apparently being victimized by the press for her Brad Pitt divorce, Justin said, “[Jennifer] is a proper badass. She has lived through a lot of bulls**t,” he said. “Many people would have crumbled under some of the stresses that have been put on her. I’m very proud of her for that, for the way she handles herself.”

While of course there’s nothing wrong with Justin singing his wife’s praises, the actor has continuously brought up her agonizing and tabloid-made love triangle several times in the last few weeks. Even though he constantly talks about how awful the media and the gossip magazines are to celebrities like him and Jennifer Aniston, he at the same time is using the same narrative to help promote his film, ‘The Girl on The Train.’

After all, if it weren’t for his marriage to Jennifer Aniston and her connection to Brad Pitt and Angelina Jolie, no one would even be talking about Justin Theroux, let alone know who he even is. As much as Justin despises all of the gossip surrounding his marriage and wife’s personal life, he’s also using it to make headlines himself. Jennifer’s battles with the press and the awful tabloid speculation about Brangelina’s divorce has nothing to do with Justin’s film career, but he keeps on bringing it up during his press tours.

Sure, it might be stressful marrying a high-profiled star like Jennifer Aniston, but there’s no doubt that Justin Theroux knew that before marrying her. And he apparently also knew that being Mr. Jennifer Aniston would also help him land roles he would otherwise never get. In fact, some critics even agree that Justin Theroux complaining about it makes him look like a hypocrite. Do you agree, CDL readers?

The lady that started it all, who made room way too soon for the all the others to come. Miss you Pooma. Love you Dolly Sophie and Clyde. #internationaldogday #theyrescueus #adoptdontshop