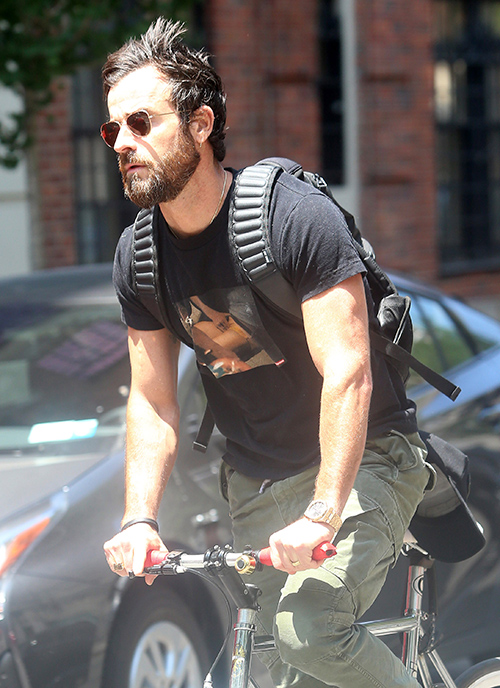 Justin Theroux has been caught in the middle of the Brangelina divorce. The partner of Jennifer Aniston was asked about Brad Pitt and Angelina Jolie’s surprise divorce announcement outside his New York City home this past weekend.

Of course, Justin Theroux has nothing to do with Brangelina’s divorce, but that’s not stopping the paparazzi from asking ‘The Leftovers’ actor uncomfortable questions about their split. The only connection he does have to all this is that Jennifer Aniston was once married to Brad Pitt and that the media has long included his wife in Brangelina’s narrative.

Yet, over the weekend, the paparazzi spotted Justin trying to make his way home in New York City when they began swarming him and asking him questions about the divorce. One photog even said, “Justin, man, what do you think of all the drama, bro? What team are you on? Who’s team are you on?”

It shouldn’t surprise anyone that Justin kept quiet, signaling that he’s not commenting on the matter. Yet, Justin has already suffered enough, as tabloids have already speculated that Jennifer is pulling the plug on her marriage now that her ex-husband Brad is single again. Surely, Justin didn’t ask to be a part of the Brangelina and Jennifer Aniston narrative, but because he’s married to the ‘Friends’ star, he has no other option now.

Justin knew he would always be compared to Brad Pitt in one way or another but, he surely didn’t expect the media to breakup his marriage because of two people he’s never met. Before marrying Jennifer, Justin enjoyed a low-key life outside of the Hollywood spotlight and gossip magazines, but now that he’s known as Mr. Jennifer Aniston, he might be carrying some regrets.

Jennifer, on the other hand, knows it’s best not to say anything about Angelina Jolie and Brad Pitt’s divorce, yet she’s parading her smug happiness for Hollywood to see. The actress enjoyed a very public date night with Justin over the weekend, looking both radiant while holding her husband’s hand after a late night dinner in Manhattan’s NoHo neighborhood.

After all, she’s been waiting for the moment for a whole decade now and why not show the world that karma has done it’s job? Jennifer Aniston for the longest time was the woman scorned in her ex-husband’s extra marital affair with Angelina Jolie. Her only problem now though might be whether or not Justin Theroux agrees to being a part of this tabloid drama. What do you think, CDL readers?

White Sands, NM w @cqsmileny Made it juuuussst under the wire for sunset. Beet was asleep in the car. He has yet to open his eyes. #brosunsets