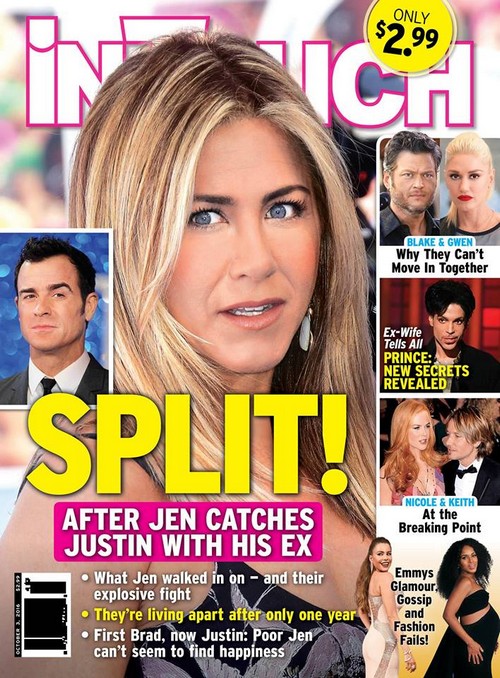 Brad Pitt and Angelina Jolie are gearing up for a nasty divorce. Reportedly Brad’s ex-wife Jennifer Aniston and hubby of one year Justin Theroux are in the middle of a marriage crisis also and it involves Justin’s ex-girlfriend Heidi Bivens.

Is Justin Theroux cheating on Jennifer Aniston with former gal pal Heidi? In Touch Weekly sources report that Justin and Heidi talk on the phone and flirt all the time. Jennifer allegedly has time and time again asked Justin to cut off all contact with Heidi but the exes can’t seem to stop.

If Justin is carrying on an affair with Heidi it would be devastating to Jennifer, don’t you think? After all, Brad cheated on the ‘Friends’ star with Angelina. Who wants to end up divorced for a second time because of a cheating husband?

When the news broke that Angelina had filed for divorce from Brad did Jennifer run off to console Brad – and be consoled at the same time – while Justin is on location in Australia filming the HBO series ‘The Leftovers’?

The cover of the magazine proclaims that Jennifer and Justin no longer live together. This isn’t anything new – previous reports have stated Justin and Jennifer’s busy schedules often keep the couple apart for months at a time. Whenever they’re apart Jennifer and Justin either text each other or talk as often as possible on the phone.

Reports of marital problems between Justin Theroux and Jennifer Aniston just happen to coincide, or so it seems, with Angelina Jolie filing for divorce from Brad Pitt. Reportedly Angelina is out for blood and attempting to ruin Brad’s reputation by accusing the actor substance abuse, anger issues and cheating with ‘Allied’ co-star Marion Cotillard.

Wouldn’t it be interesting if Jennifer is offering a shoulder for Brad to cry on, and also pouring out her heart to Brad Pitt because Justin Theroux is a cheater? Brad did cheat on Jennifer with Angelina. Now Angelina Jolie, who tries to portray herself as the perfect mother and ever faithful wife, may have lost hubby Brad to an adulterous affair.

A representative for Jennifer Aniston told Daily Mail that the In Touch Weekly article is “a complete fabrication.” According to the representative Jennifer and Justin have no plans to split after only one year of marriage.