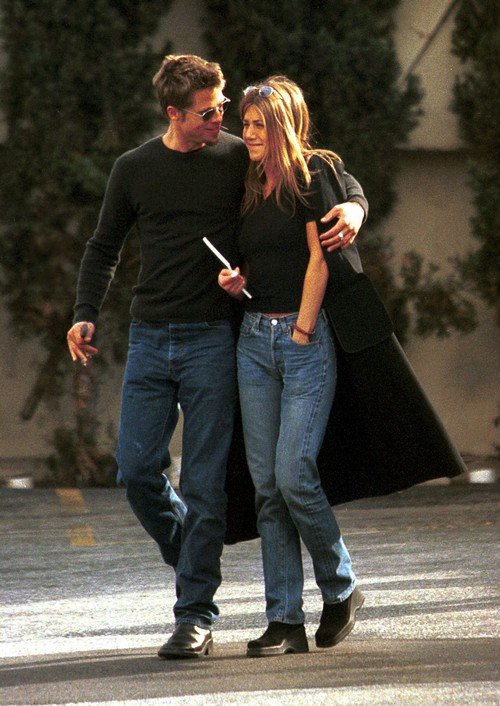 It’s clear that Angelina Jolie is done with Brad Pitt but Jennifer Aniston might be waiting with open arms to get him back. Will the Brangelina divorce reunite Brad and Jenn? This could give Jennifer Aniston back the husband she lost plus the kids she can’t seem to have on her own.

Brad Pitt is fighting for joint custody of his six kids with Angelina Jolie rather than the visitation-only divorce settlement she’s trying to give him. Jennifer would be a wonderful step-mother to Brad’s six kids since she’s been unable to have any of her own with Justin Theroux.

Rumors are already swirling that Jennifer and Justin are on the rocks and a recent story in InTouch reveals Justin Theroux has been in close contact with his ex Heidi Bivens. This sparked talk of a split and now Jennifer may also be focused on her ex. Justin and Jenn have been plagued with divorce rumors for months.

Jennifer and Justin may be ready to mutually ditch their marriage to go back to their respective exes. Theroux has been out of the US as he films his HBO show The Leftovers in Australia and this has put a strain on his marriage, according to reports, and now he’s also been texting his ex.

Has Jennifer followed her husband Justin’s lead and has been texting her ex too? Remember Brad and Jennifer split because he was ready for kids and she was not because she wanted to focus on her career. But now Jennifer is ready to settle down and raise a family.

However, since she waited so late Jennifer Aniston may not be able to get pregnant. Rumors have swirled heavily over the last couple of years that Jennifer and Justin have been undergoing infertility treatments with no success – looks like she waited too long to go that route.

But it would be sweet revenge – and fulfill that yearning to have a child – if Jennifer ended up helping raise Angelina Jolie and Brad Pitt’s kids. Brad is reportedly ready to step away from Hollywood and Aniston is also ready to step back from acting.

When Brad and Jennifer were married, they were homebodies that liked to hang out and spend time together – but then he got wanderlust. But now it seems he’s ready for a woman in his life that’s not globetrotting and can focus on him.

This could be a win-win for Brad and Jennifer – could it be just a matter of time before Jenn and Brad are back together? Recent news reports show that Brad is part of a major project in Croatia – a $1.5 billion resort called Barabragia in Zablace, Croatia.

Brad has long been interested in architecture and just met with architect Nikola Basic in Croatia to finalize plans for the luxury resort. Jenn seems ready to take a break from Hollywood and focus on family, so getting away from LA and the ever-present paparazzi would give them a break.

How long until we see pics of Brad with Jennifer the same way we did of Brad with Angelina? Remember when the rumors swirled that Jenn and Brad were done and Angelina was the new woman in his life – we saw pics of Brad, Angie and little Maddox Jolie cavorting on the beach.

So when will we see pics of Brad, Jennifer, and his six kids hanging out? What do you think? Are you excited about the rumored reuniting of Brad Pitt and Jennifer Aniston? Do you think she’d be a good stepmom to his half a dozen kids?

Share your comments below and check back with CDL often for the latest celebrity news and gossip.