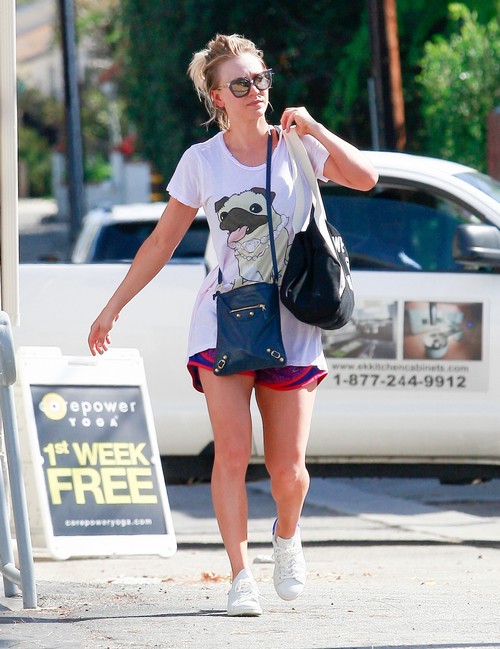 Kaley Cuoco may have hoped the Grammy night PDA with country singer Sam Hunt was something special. But the handsome crooner left the actress alone and lonely before the sun came up. Not only is Kayley’s personal life a mess, is the depressed, lonely and angry actress being written out of The Big Bang Theory?

A source divulged to Star magazine that the actress feels stuck in a rut in the role of Penny Hofstadter on “The Big Bang Theory” and Cuoco is taking it out on her television family.

Right now Kaley Cuoco is one of the highest paid actresses on television, but that hasn’t translated into Kaley becoming the hot and in-demand A-list actress she expected to be. Kaley hasn’t been able to score any leading lady roles in big budget movies.

Co-star Mayim Bialik reportedly won’t speak to Kaley unless absolutely necessary. The cast and crew are all fed up with Kaley’s constant mood swings. The insider reports that Kaley “flips out about makeup, wardrobe, even the catering.“

It sounds as if Kaley has completely isolated herself from her from the cast and crew of the hit CBS comedy with her diva behavior. Is Kaley taking out her frustration over her career and personal life out on everyone around her?

CDL reported that co-star and former boyfriend Johnny Galecki may have reunited briefly with Kaley. Both Kaley and Johnny denied any romance, but insiders revealed that the on-screen husband and wife did give their relationship one more try and it just didn’t work out.

Does Kaley regret giving up on her marriage to Ryan Sweeting too soon? The actress and the athlete called it quits after only 21-months. Kaley then rushed to have the tattoo on her back of their wedding date changed to a giant moth.

Can Kaley Cuoco get over her dead-end hook-up with Sam Hunt and change her attitude before TPTB at the network grow weary of her out of control behavior and write Penny Hofstadter out of the show?