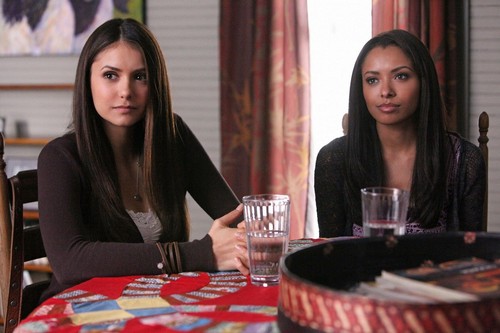 Is Kat Graham implying that Nina Dobrev is to blame for the impending cancellation of The Vampire Diaries. Bonnie Bennet and Elena Gilbert were the best of friends on “The Vampire Diaries,” but the actors’ relationship outside of the show would not even remotely qualify as friendship.

So now it’s not that surprising that Kat Graham may be blaming Nina Dobrev for the demise of the once-very popular CW series. Word has it that Kat is not at all pleased with Nina’s exit on The Vampire Diaries Season 6 but she still continued her work with the show in hopes that it could get the same reception it did without Ian Somerhalder’s ex.

But now that the show’s ratings are plummeting, she just can’t pretend that everything’s hunky-dory. Hence, Kat has decided to announce last week that the upcoming TVD Season 8 would be her last.

In an interview with Us Weekly, Graham revealed, “Season 8 will be my last season.” And she may have thrown some shade at her former costar when she said, “I just hope that whatever I do after, the crew can come with me. If the crew can come with me, then we’ll be good. The crew is going to be the hardest thing to let go, because we are a family.”

Obviously, Kat was insinuating that the cast and crew did not mean a lot to Nina since she left the show though it has yet to wrap up the story, and she exited the series because of her ex, Ian Somerhalder.

Without Nina Dobrev TVD lost its spark and all of her costars know this. It’s just that Kat, who is apparently close with Ian Somerhalder’s wife Nikki Reed, is not one to keep her thoughts to herself.

Do you think Kat Graham is right that Nina Dobrev is the reason The Vampire Diaries is a dead man walking? Sound off below and always check CDL for the latest Hollywood news and gossip.