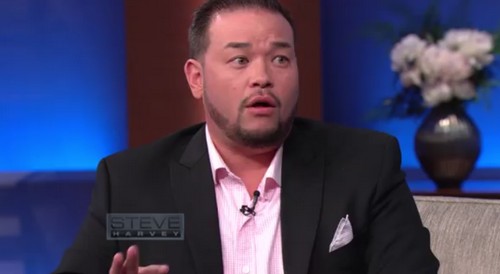 Kate Gosselin and Jon Gosselin are still involved in a custody battle. Jon claims to not have any contact with one of the Gosselin children in over a year. The former reality star revealed that Kate allows limited visitation – Jon can only see four of the eight children at one time.

In a sit down with Steve Harvey, which will air on Monday, January 25, Jon told the talk show he hasn’t seen all eight of the children all together in three years. Jon is entitled to one dinner night per week and time with the kids every other weekend. “I do have Friday, Saturday, Sunday, Monday,” Jon told Steve.

Harvey asked Jon whether or not Gosselin is able to have all eight children at one time for dinner or every other weekend. Jon replied that most of the time only four of the eight children are permitted visitation. Basically, Jon divulged, “I only get what I get.” Kate holds all the cards as to which kids will be show up for dinners and weekends with dad.

As for the son Jon hasn’t seen or spoken with one of the Gosselin children in nearly 18 months, Jon did not reveal which boy. Jon has no idea why communication has been cut off with this Gosselin child.

Gosselin explained to Steve that it’s impossible to co-parent with Kate. The exes do not communicate unless it is in court. There was a point in time where Jon Gosselin would have liked to co-parent with Kate Gosselin, but doesn’t think at this point they could do so. And the eight Gosselin siblings are stuck in the middle of this parental war.

There is no clear reason, at least to Jon Gosselin, why Kate Gosselin is playing games when it comes to visitation. At this point Jon isn’t angry with Kate, Gosselin is just frustrated. Jon just wants to be able to see all eight children at once and it doesn’t seem as if the “Kate Plus 8” star will allow that to happen. Jon puts up with Kate controlling over who sees dad and who doesn’t. What else can Jon do?