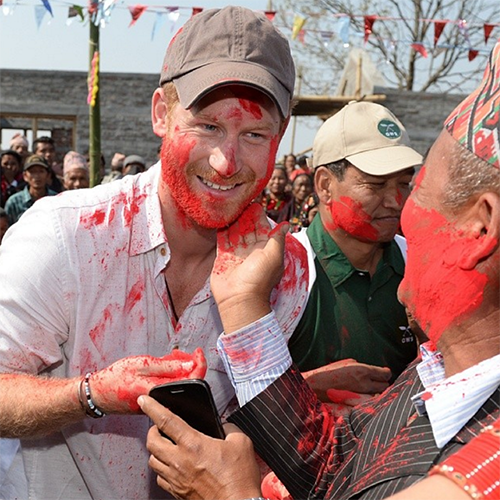 After the Kate Middleton and Prince William Easter scandal, the Royal Family needs some good press. Prince Harry’s trip to Nepal has provided Queen Elizabeth with some much needed distraction from speculation that the Cambridges’ marriage is over.

Harry took his official visit to Nepal very seriously. One stop during the trip was in Bhir Kuna where Harry exchanged a solemn Namaste greeting with one of the villagers. Prince Harry also participated in the ancient Hindu religious ceremony known as the Festival of Colors and worked with Team Rubicon on rebuilding a Leorani village school destroyed by an earthquake in 2015.

Wearing his military dress uniform, Prince Harry attended a service at the British Gurkha Camp in Pokora. A wreath laid down in an act of remembrance included a card from Harry which read, “With the deepest admiration, respect and gratitude. Your sacrifice will never be forgotten. Hardick Sradhanjali [Heartfelt condolences].”

All the while Prince William was trying to sneak off to Kenya for ex-girlfriend Jecca Craig’s wedding. Sister-in-law Kate Middleton, infuriated and humiliated, refused to attend Easter Sunday church services with the Royal Family. Instead, a sulking Kate slunk off to Carole Middleton’s home.

One Kensington Palace Instagram follower summed things up quite nicely. “At least Harry is working!! But not enough work from Kate THE duchess dolittle and Prince WILLnot!! Lazy Katie before marriage and still lazy years in royalty ..shameful ! Bless The Queen and Prince Philip for all their dedication.”

Kate Middleton and Prince William are under pressure to step up their game while in India and Bhutan in April. Obviously, everyone is sick and tired of the Duke and Duchess of Cambridge using Prince George and Princess Charlotte a reason to pick and choose which Royal responsibilities they wish to fulfill.