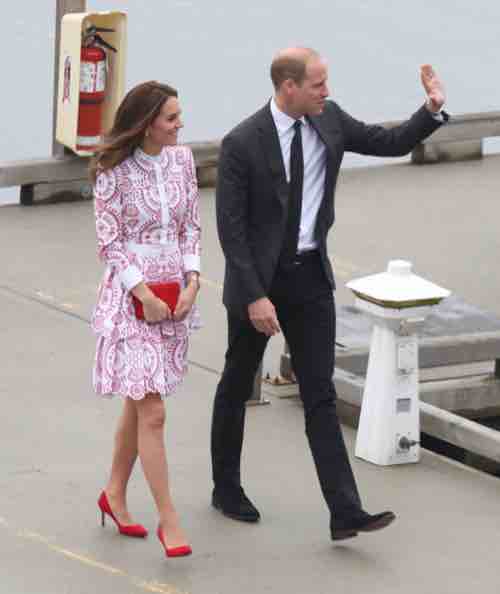 Kate Middleton got off on the wrong foot upon the Cambridge’s arrival in Canada and Queen Elizabeth is furious. For whatever reason, Kate found it necessary to stoop down to speak with Prince George after disembarking from the Canadian Royal Air Force jet that delivered the family of four safely from Britain.

Wasn’t Prince William reprimanded for exactly the same thing by Queen Elizabeth while the Royal Family was watching an RAF display from the balcony of Buckingham Palace? Good thing Queen Elizabeth wasn’t along to see Kate pull the same Royal parenting no-no.

Of course Kate Middleton is also already being criticized for the move. The biggest critique is that the Duchess of Cambridge had yet another wardrobe malfunction because the Royal blue dress was much, much too short and the entire world nearly saw Kate’s lady parts when she hunkered down to speak to George.

It wasn’t just the crouching down that caused the near wardrobe malfunction. Kate was holding Princess Charlotte at the time and when Kate when to stand up

Why did the Duchess of Cambridge feel the need to crouch down and speak with Prince George? The 3-year-old wasn’t misbehaving. If anything, the toddler seemed quite nervous, even a bit scared, by all the attention paid by the paparazzi on hand to capture the Cambridge’s arrival. We’ll concede, maybe George needed a little comforting.

We understand the Prince William and Kate Middleton want to make Prince George and Princess Charlotte’s lives as normal as possible. It’s a natural reaction to get down at your child’s level to explain something to them, especially when the little one looks a bit frightened.

But this official Royal visit to Canada isn’t an ordinary situation and should be treated with the respect it deserves. What is normal about arriving on a Canadian Royal Air Force jet all the way from the England to Canada?
Even at three-years-old George is aware that he is an important person and has been taught to behave in a proper Royal manner when in public. Too bad Kate Middleton didn’t get the memo on proper Royal public behavior.

Prince William and Kate Middleton won’t be making many public appearances with Prince George and Princess Charlotte. The Royal children will be at Government House, the Cambridge’s Canadian base of operation while visiting British Columbia and the Yukon Territory.

Hopefully we’ll see no further near miss wardrobe malfunctions nor commoner parenting skills of which Queen Elizabeth does not approve. Come back to CDL often to catch up on all your Royal news and reports.

The English Royals arrive at Victoria airport for the start of of their Royal tour of Canada on September 24, 2016 in Victoria, Canada. by FameFlynet

The Duchess receives a bouquet and a smile from one of the children in the playground @issbc in Vancouver #RoyalVisitCanada pic.twitter.com/LURnYF8LMv

Thank you to the @RCAF_ARC who flew the family safely to Victoria. pic.twitter.com/2wEhjaqNCd