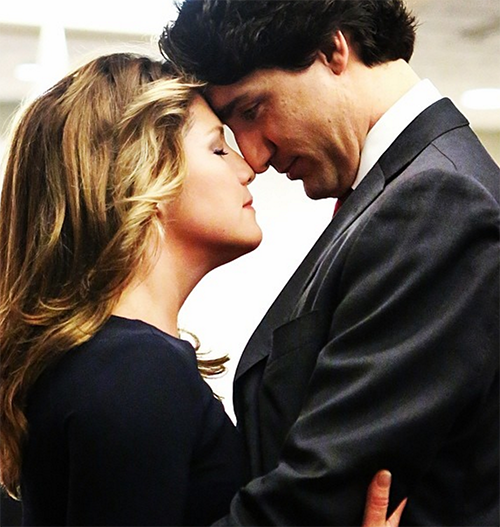 As Kate Middleton and Prince William prepare to leave for Canada, the world is preparing for a fashion battle between the Duchess of Cambridge and Prime Minister Justin Trudeau’s wife, Sophie Trudeau. Fans and royal watchers are praying Kate doesn’t have any wardrobe malfunctions.

In June, the Justin Trudeau’s wife stunned everyone when she wore a strapless gold brocade gown for a state dinner in honor of Mexican President Enrique Pena Nieto. When has Kate Middleton dared to wear a strapless gown, let alone one of glittering gold?

As far as we know, Sophie Trudeau hasn’t had a wardrobe malfunction since her husband took office in November 2015. We’ve come to expect wardrobe malfunctions of all sorts from Kate, especially skirts that get caught in the wind, delivering an eyeful of the future Queen’s bottom.

It isn’t just the glamorous gowns and jewelry that set Sophie apart from Kate. The former television entertainment reporter looks amazing when she goes casual. Blonde locks tousled and wearing a white V-necked blouse and jeans, the prime minister’s wife laughingly posed for a cover of Chatelaine magazine.

Kate’s attempts to look casual are frequently miserable failures. Can anyone forget the awful blue and white print capris Kate wore while visiting Cornwall? Not to mention the ill-fitting cream colored blouse and mannish navy blue blazer? Sophie wins in the casual look department as well.

Prime Minister Justin Trudeau and Sophie Trudeau will accompany the Duke and Duchess of Cambridge on many of the Royal couple’s stops during the Cambridge’s visit through British Columbia and the Yukon Territory. No doubt, Kate and Sophie’s fashion choices will be compared and critiqued along the way.

Kate was heavily criticized for wearing a blue dress with a high-slit while visiting Stewards Academy for a Heads Together event recently. The blush pink dress Kate Middleton donned in Cornwall was dubbed sexy but boring.

Sophie Trudeau will be watched by the world during this official Royal visit and must have carefully chosen her wardrobe to ensure she is not an embarrassment to Canada. Hopefully, Kate Middleton has taken the same approach and made appropriate fashion choices for her second official Royal tour of Canada.