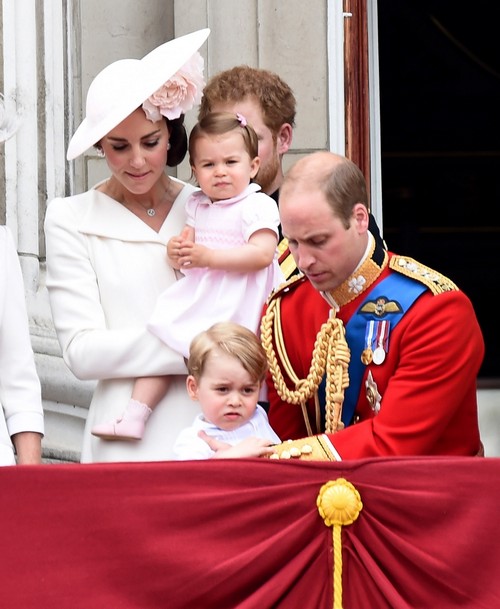 Prince William’s latest comments about his children Prince George and Princess Charlotte are raising eyebrows once again. There’s a possibility that Kate Middleton might be worried that her husband is favoring one child over the other, especially after comments he made during a recent visit to the National Football Museum in Manchester, England this week.

According to Hello Magazine, the Duke of Cambridge told England women’s team members Steph Houghton and Jill Scott, ‘Charlotte is the one who shows more aptitude [for football]. George is sort of getting into it slowly, but Charlotte is showing more aptitude.”

Of course, Kate Middleton is upset as this isn’t the first time Prince William has shaded his own son. Did William really have to publicly say that one child is better in soccer skills than the other?

In fact, he’s hinted that Prince George is a highly-energized toddler who is a lot to handle at home, and has even called him spoiled by revealing that he received too many presents during his last birthday this past summer.

If that weren’t enough, Prince William even moaned and complained about how both Prince George and Princess Charlotte don’t have much of an attention span compared to another toddler they met during their trip to Canada last week.

In fact, it almost seems that each and every time Prince William mentions Prince George, he complains about one thing or another. While there’s no doubt that he loves both of his children equally, there could be a possibility that the future King of England is simply frustrated with his home life and all the pressure he is getting from his grandmother, Queen Elizabeth to portray the myth of a ‘perfect, happy family’ with Kate Middleton.

Then again, Prince William might be as eager about his parenting responsibilities as his father Prince Charles was, who showed little or no affection towards Prince William and his brother Prince Harry while they were growing up.

Prince Charles only managed to lighten up and build a better relationship with his sons after Princess Diana’s tragic death in 1997 forced him to be more involved in their lives.

Tell us CDL readers, do you think Prince William is unhappy with his personal life? Could that be the reason why he’s constantly complaining about fatherhood? Considering how difficult he’s finding parenthood to be, could his marriage to Kate Middleton be in jeopardy as well?

Is Kate Middleton indeed worried that her husband might be favoring one child over the other? Let us know your thoughts and of course, check back with CDL for all the latest news on the royal family right here!

Got a @LondonMarathon place? Here is a msg from Prince Harry.
If u would like to run for #HeadsTogether sign up here https://t.co/0v2EX639C8 pic.twitter.com/dk2boo2YA5

The Duke chats with families @FrancisHouseCH, which looks after 370 sick children, teenagers and young adults pic.twitter.com/1k4Pfdqrhp