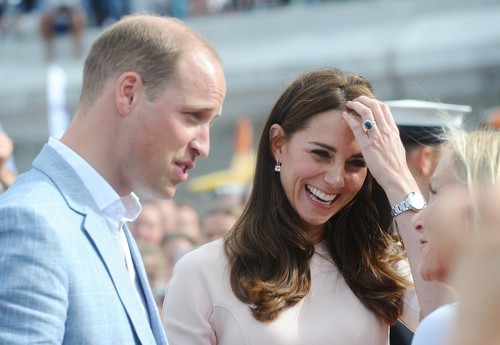 Is Kate Middleton forcing her fame-hungry sister Pippa out of the spotlight? Pippa Middleton and James Matthews’ engagement was the biggest celebrity gossip news of the summer when the couple made their announcement back in July. Yet, Kate Middleton’s younger sister has apparently gone into hiding as there’s new speculation that Queen Elizabeth and the royal family are afraid that Pippa Middleton’s fiancé James Matthews and his family might cause havoc for the British monarchy thanks to their reality television connection or worse, becoming fame-seeking celebrities wannabes just like the Middletons.

Pippa Middleton and James Matthews’ wedding is already being called the social event of 2017. There have been reports of Victoria Beckham wanting to design Pippa Middleton’s wedding dress and whether or not Kate Middleton and Prince William will be in attendance. After all, there’s no doubt that Pippa Middleton doesn’t want to be upstaged by Kate Middleton at her own wedding and that’s why the Duchess of Cambridge will most likely keep a very low-profile the day her sister becomes Pippa Matthews.

And even though Pippa Middleton’s only connection to the royal family is through her sister, Queen Elizabeth has every reason to be concerned about her James Matthews’ wedding. After all, James Matthews’ brother Spencer Matthews already has an established reputation as a reality television star with a troubled past and very loose lips when it comes to the tabloid media.

The last thing Queen Elizabeth needs is for any of Kate Middleton and Prince William’s secrets to be splashed all over the tabloids, thanks to Spencer Matthews. There’s a good chance that Pippa Middleton knows this and that’s why she’s been keeping her distance not only from the royals, but from the media altogether.

Surprisingly enough, Pippa Middleton has kept a very low profile since her James Matthews engagement news. The Middletons, which also includes the paparazzi and camera-friendly Carole Middleton and James Middleton, have used the media to their advantage to help raise their celebrity profiles and boost their businesses.

Yet Pippa Middleton has managed to keep her wedding details to herself, which can either mean that she wants to keep everything top secret and sell her information to the highest tabloid bidder or she simply doesn’t want to step on an already irate Queen Elizabeth and her shoes. Queen Elizabeth has been dealing with the Middletons and their public gaffes for five years now and the last thing she wants right now is more questionable press from Pippa Middletons and the Matthews.

And that’s also probably why Queen Elizabeth has supposedly ordered Kate Middleton and Prince William back to work after their multiple summer vacations. In fact, it’s the only way the royal family can regain the spotlight again from Pippa Middleton and her wedding.

What do you think, CDL readers? Don’t forget to check back with CDL for all the latest updates on Pippa Middleton’s wedding and the British royal family right here.

Duke and Duchess of Cambridge spotted on Towan Beach In Newquay, Cornwall, England where they will be given an introduction to the work of the Wave Project, an organization that uses surfing as a tool to reduce anxiety in children and improve their mental well-being on September 1, 2016. Their Royal Highnesses will see children from the project and their surf mentors take part in a number of surfing activities, and meet a selection of the charity’s volunteers, staff and supporters on the beach. FameFlynet

It’s now a lovely day for a walk on St Martin’s. pic.twitter.com/2k6a3XLFnE

The Duke and Duchess have arrived at the beautiful @TrescoGarden for their first stop in the Isles of Scilly. pic.twitter.com/pNMId9xNVa