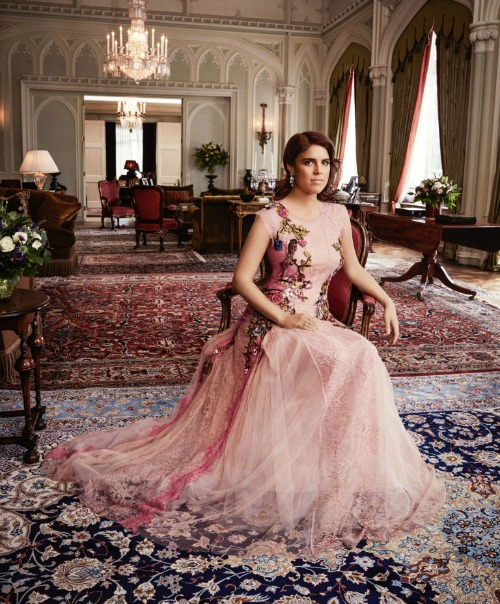 Princess Eugenie has officially stepped out of the shadow cast by Kate Middleton and the Duchess of Cambridge must be seething mad. Eugenie, wearing a stunning Alberta Ferretti gown that cost nearly $10,000, appears on the cover of Harper’s Bazaar September 2016 issue.

Inside the pages of Harper’s Bazaar is an interview with Beatrice and the young Royal talks about a day in the life of a princess. Eugenie sat down for the face-to-face at the York family home in Windsor Great Park.

While Kate Middleton is frittering the day with inconsequential Royal obligations, or trying to avoid them all together, Eugenie is hard at work as an associate director for the contemporary art gallery Hauser & Wirth in London.

Exactly what does Princess Eugenie do all day long? What’s a typical day include for the daughter of Prince Andrew and Sarah Ferguson? Beatrice was quite detailed, but it’s all quite boring really.

At about 6:45 a.m. the princess wakes up, reads personal e-mails and hits the park to get in a workout for an hour. Or she hits an “amazing, women-only gym called Grace Belgravia” with her best friend.

Blah, blah, blah…Eugenie buys groceries and some fresh croissants at Waitrose, goes home for a shower, usually will have a conversation of some sort with Sarah Ferguson or Jack. That’s Eugenie’s dog Jack, not boyfriend Jack Brooksbank.

Eugenie then explains that she does her own makeup – in the car on the way to work. What does Eugenie wear to the office? A dress and boots and recently the princess just started wearing high heels because they are just so grown-up.

Later Eugenie will lunch at Detox Kitchen which has the absolutely best food- it’s all so very healthy. Hey, something Princess Eugenie and Kate Middleton have in common! The Duchess of Cambridge and Queen Elizabeth’s granddaughter both are health food junkies!

Of course, there are Royal obligations that must be met and Eugenie leaves the offices of Hauser & Wirth by 5:00 p.m. – and her bosses are ever so accommodating and understanding. If Princess Eugenie doesn’t have any, as she calls them, family obligations, it’s out for dinner and drinks – Eugenie prefers a vodka and soda with “loads of lime. Can’t beat that,” Princess Eugenie revealed in the interview.

As you can see, the only stunning part of the Harper’s Bazaar cover and interview is the blush pink dress and the peek at the TV room at Royal Lodge. Hoping for something more exciting?

Sorry to disappoint, but Princess Eugenie’s life is as uninteresting as Princess Beatrice’s. Maybe that’s why the York sisters are constantly traipsing off on free vacations from uber-wealthy friends. The 15 holidays Eugenie and Beatrice take each year are the only truly exciting part of their lives. Come back to CDL for all your Royal news and views!