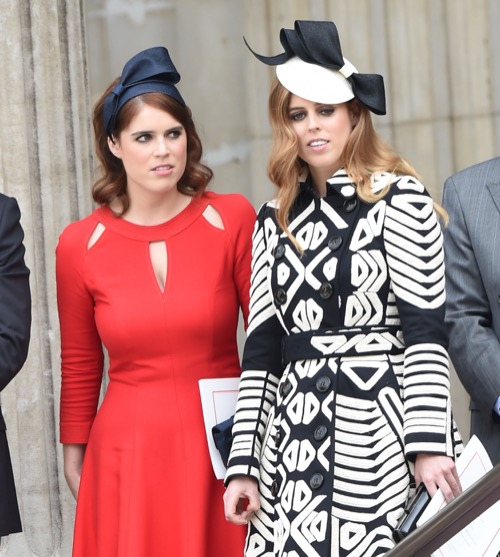 All eyes were on Kate Middleton at a recent event for the Queen’s birthday – including glares from her cousins-in-law Princess Eugenie and Princess Beatrice. At Queen Elizabeth’s 90th celebration at St Paul’s Cathedral for the National Service of Thanksgiving, the jealousy was obvious as Prince Andrew’s daughters took a back seat to limelight hogging Kate.

Kate Middleton was escorted between the two princes of the realm Prince William and Prince Harry while, as usual, Princess Beatrice and Princess Eugenie were left to walk unescorted and several paces behind their cousins. The pecking order is obvious.

As the Royal family exited St Paul’s Cathedral, the hierarchy was fully on display as Kate, flanked by Harry and William, was ushered out to the cheering crowds before the girls. Neither Princess Eugenie nor Princess Beatrice could hide their irritation at yet another instance of being marginalized.

In particular, Princess Beatrice seemed to be glaring daggers at her cousin-in-law Kate Middleton as they exited the church after the much grander procession of the Cambridges.

The pouty Princesses stood with their father Prince Andrew while their mother, Sarah Ferguson, was not in attendance at all since she’s persona non grata at Royal functions thanks to the reveal of her selling access to her Royal ex-hubby.

The bottom line is, despite their Royal blood, Princess Eugenie and Princess Beatrice have a lot of baggage. Prince Edward, the youngest of Queen Elizabeth and Prince Philip’s children, was also on hand with Princess Sophie, but you’d barely notice since they were shuffled to the back as well.

As usual, Kate Middleton was prominently on display as one of the “golden three” that always seems to take the limelight and is positioned near the Queen, often supplanting even Prince Charles, the crown prince. The Cathedral event was no exception and Kate was front and center yet again.

With her back turned to Princesses Eugenie and Beatrice, Kate would not have seen the glares, but she might have heard the giggles and whispers as Prince Andrew’s two daughters carried on as they followed their more “important” royal cousins at a distance.

You can see from the photos that the “second string” royals Prince Andrew, Prince Edward, Princess Sophie, Princess Eugenie and Princess Beatrice look none too pleased to be forced to stand back while Prince Harry, Prince William and Kate Middleton soak up the adoration.

To add fashion insult to injury, once again it’s Kate Middleton’s ice blue laced overlay dress that’s getting all the attention while Eugenie’s red cut out dress made her stand out (but not in a good way) and Beatrice’s black and white belted geometric patterned coat was a comedy of errors.

Perhaps that’s why Kate Middleton is always out front – she looks the part! What do you think Royal watchers? Did you notice the glares? Share your comments on the outfits and Royal intrigue on display at the Queen’s 90th birthday event.

Be sure to check back often with CDL for all your Royal news and gossip!