Kate Middleton And The Royal Family: Top Ten Stories Of 2012! 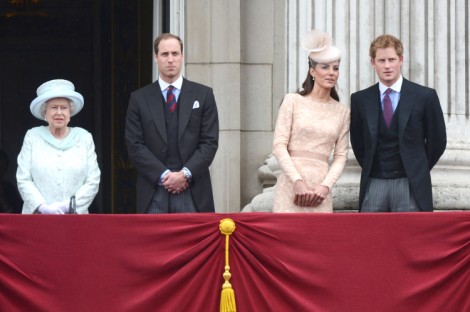 Two thousand and twelve has been great for gossip. Katie Holmes shocked us, Kristen Stewart disgusted us but no one brought the drama quite like those royals. From Sin City disasters to French gun scandals, those Windsors and Middletons left nothing to be desired. So here’s my list of the top ten best stories. I’m sure we won’t agree on all of them but these were the headlines that kept my attention throughout the year. Hope you enjoy!

10. Stripped Down Monarchy: This year saw a lot of changes in the House of Windsor but none so evident as Prince Charles’ wish to streamline the players. These subtle changes involved stripping Prince Andrew of some of his clout and giving the majority of the responsibilities to Charles’ immediate family. Sometimes it worked, sometimes it didn’t (see Prince Harry Vegas below). Even Princesses Eugenie and Beatrice were told they had to get jobs AND pay their own rent. This all came to fruition during Queen Elizabeth’s Jubilee celebrations when Charles convinced his mum to only allow his family to accompany her on the balcony. It was a strong message of the new monarchy and one that I’m sure we haven’t heard the end of any time soon.

9. Kate Middleton Nurse Hoax: This obviously wasn’t one of the most fun stories but it is one of the most compelling. We all know the story of the nurse working while Kate Middleton was in the hospital. Jacintha Saldanha killed herself after being the butt of the joke of two Australian radio hosts. Not only was it a tragedy but it also put a huge negative spin on what should have been the best royal story in 2012. Not the best way to start a royal pregnancy and will definitely have consequences on how Prince William handles the media and his wife in the future.

8. Kate And Harry Flirting On The Balcony: Remember all those Kate and Harry flirting stories? Maybe they weren’t true (maybe they were) but they caused quite a stir during the Diamond Jubilee celebration. Kate seemed very into her brother-in-law and appeared to give him much more attention that her grumpy ‘ole husband. It was great for gossip and solidified why Harry the rascal will be in our hearts forever. Whether or not it actually happened those two didn’t stand so close after all the commotion was made over their behavior and that was proof enough for me.

7. Kate And William’s Olympic Lovefest: Perhaps No. 8 accounted for No. 7 because Kate started throwing her man some love for all to see. You remember the photos, right? William had his hand on Kate’s leg! Kate threw William all those saucy looks! And then they hugged in excitement when some English dude won something. It was pure gold and showed us that the Cambridges might not be so stuffy after all.

6. Pippa Middleton Book Bomb: Pippa Middleton didn’t have the best year. I know she’s not exactly royal but Princess Pippa is a member of the royal family in my book so she’s on this list twice. Deal with it. She wrote a book! Sadly it did so bad the publishers started slashing prices just weeks after it was released. She became the laughingstock of the literary world with her too obvious party-planning advice. Here’s hoping she turns everything around by taking that Today Show offer for 2013!

5. Camilla Parker-Bowles Vs. Kate Middleton: Camilla Parker-Bowles and Kate Middleton continue to try to convince the world they’re best friends but the tabloids don’t seem to buy it. Every week there’s a new story about Camilla’s jealousy and her worries that Kate may become Queen over her. Again, this is one of those stories that probably isn’t true but it’s still fun to hear about. Besides, after the Christmas gift, I’m beginning to believe Camilla does have a problem with her popular step-daugher-in-law. This is one of those stories that promises to only get better as the years go on.

4. Pippa Middleton’s Gun Show: Can you believe this was 2012? It seems so long ago but Pippa brought in 2012 with a bang. Not only did she attend a ridiculous birthday party in France full of dancing midgets and lecherous socialites, but she was in the getaway car when a friend pointed a fake fun at a paparazzo. Naturally, she got off but she was forced into hiding for months. This was the first big misstep for the Middleton family. If only Pippa knew what Kate and Harry had in store for us later in the year, then maybe she wouldn’t have been so hard on herself.

3. Prince Harry’s Las Vegas Balls: Harry had a great summer. He wowed us with his charisma during the jubilee and danced into our hears while on tour in Jamaica. He even stood in for the Queen during the Olympic closing ceremony. Charles must have  been right. There’s no need for the lesser royals when his sons were responsible enough to take on the bulk of work. Harry had grown up… not. Just weeks after the Olympics he was caught in Las Vegas with his pants down and shipped back to England with his tail between his legs and later sent off to Afghanistan. Luckily for him he wanted that all along and his approval rating is still high as ever. Harry can do no wrong.

2. Kate Middleton’s Topless Vacation: We all know the story. Kate Middleton has boobs and a vagina. Even I had to see it to believe it. Camilla’s still laughing over the whole thing.

1. Royal Baby!: Did you really think anything else would be No. 1? This is what everyone’s been waiting for for the past 2 years and Kate came through. Her job is done and that suits her just fine.

So what do you think of the Kate Middleton highlights? Can 2013 beat the 2012 royal family? We’ll have a royal baby so there’s a chance but we definitely need Prince Harry back!