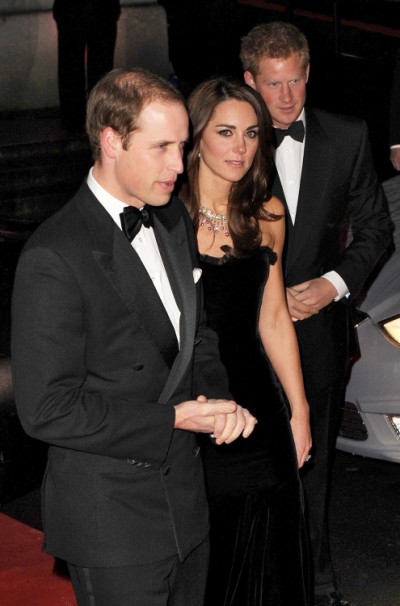 Where’s the big reconciliation? Have you seen it? I haven’t seen it. Have you heard anything about it? I sure haven’t. I have, on the the other hand, heard all about Prince Harry’s partying since returning from Afghanistan less than a week ago. Could that be the reason Kate Middleton and Prince William are lying low? The last time Harry came home from war William was there to pick him up at the airport. Where are you William?!

Kate and William couldn’t still be angry over Harry’s William/Afghanistan comments, could they? I doubt it. Everyone’s up to speed  on the fact that Harry’s a dumb ass and nothing out of his mouth should be taken seriously. But what could it be? Kate, William and Harry are the Three Musketeers, the Three Amigos the cheese to each other’s macaroni. Are William and Kate still trying to distance themselves from Harry’s frank and beans scandal from the summer or could it be as simple as they just can’t pull all-nighters like they used to? Because that seems to be where Harry’s head is at.

According to the Daily Beast Harry went balls to the wall on Saturday partying it up with all his old mates. The prince, who’s on a 4-week vacation, started early at a pub around 9 p.m. and ended early at a house party, leaving around 10 a.m. Reporters know this because Harry’s security were spotted waiting for him outside the house for HOURS. God, what a shit job.

But can you blame him? Of course not! He’s been at war for the past four months but I’m sure getting wasted all night wasn’t exactly what Kate and William had in mind when the three talked of catching up. Who knows? Maybe William had to “work” last weekend anyway. We know Kate was in town because she was tracked browsing jeggings at the Gap in Chelsea on Friday. I still think she had time for a quick Mustique vacation! But as we all know about Kate, despite how she sells herself, she’d much rather go shopping than drink empty calories with blue bloods, Harry or no Harry.

So, are Prince William and Kate Middleton avoiding Prince Harry or have their priorities just drastically changed since he left for Afghanistan? Did they have the gall to keep their welcome home party behind palace walls? Honestly, why do they have to be so selfish?!