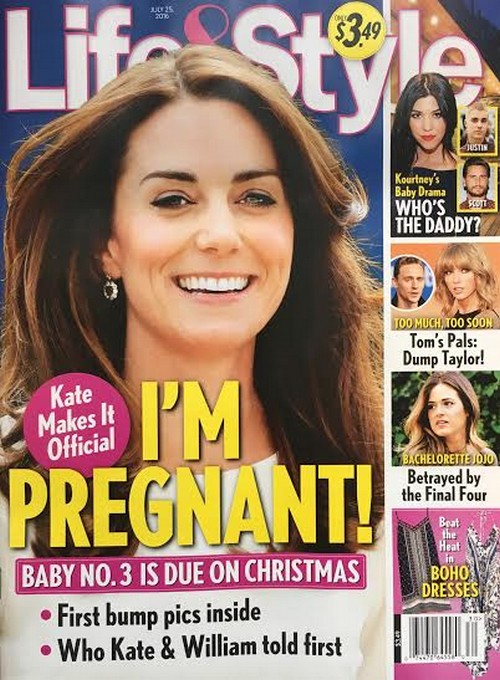 Is Kate Middleton pregnant – well according to a report from Life & Style The Duchess of Cambridge and Prince William are expecting a Christmas baby. Kate Middleton might not say much when it comes to the media (or do much either, especially when it comes to her charity work, according to her critics), but if there’s one thing she’s best known for these days, it’s her impeccable style and of course, all of the baby bump speculation that’s been following her ever since she married Prince William back in 2011.

And that’s probably why the Duke and Duchess have been grinning from ear to ear lately as there’s a new report that says the British royal family is going to have quite the Christmas celebration this year as the Duchess is reportedly expecting the couple’s third child at the end of this year.

Kate Middleton and Prince William have every reason to be overjoyed about their baby news. They manage to make Internet waves each and every time they step out with their children, Prince George, who will be turning 3 this month, along with 1-year-old Princess Charlotte, as it’s the only type of positive press they’ve managed to get in the last few years.

And with another bundle of joy joining them this Christmas, the public will have another reason to follow the young royal family’s every move in the public spotlight.

One insider dished to Life & Style Weekly, “It’s official! She is due on Christmas. Kate and William are overjoyed. They don’t mind whether No. 3 is a boy or a girl. They already have one of each, so they just want their next child to be healthy.”

And if that weren’t enough, Queen Elizabeth also supposedly thinks this new royal grandchild will be a perfect gift, calling it a “fabulous present for her 90th birthday this year.”

So far, Kensington Palace has not confirmed the pregnancy news (since it is merely tabloid speculation), but it will only be a matter of time before the world once again focuses on every maternity outfit Kate Middleton steps out with in the coming days.

Knowing how secretive and how protective Prince William likes to be about his family, there’s a good chance that the public won’t officially know until Kate Middleton is well into her second trimester. A third child will not only help boost their image, but also let their critics forget about their “lazy” and “work-allergic” reputation for the coming months as they focus on Kate Middleton’s pregnancy and the newest addition to the British royal family instead. Come back to CDL for all your Royal New and Gossip!