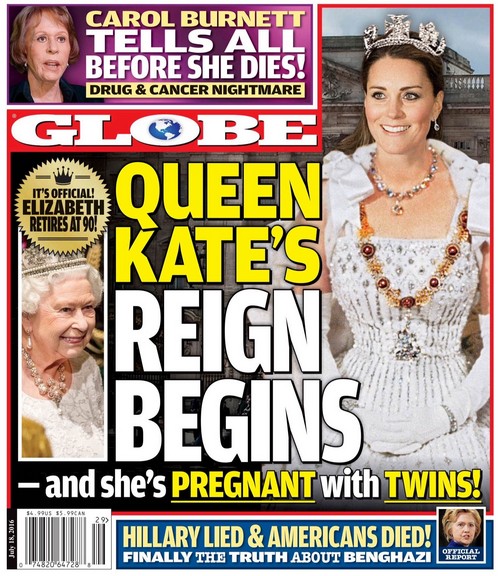 Kate Middleton, pregnant with twins, is prepared to take the throne as the next Queen according to a shocking report from GLOBE. Queen Elizabeth’s fragile health is forcing the monarch into retirement. Kate Middleton has begun to assume more and more of Queen Elizabeth’s duties, even though the Duchess of Cambridge is three months pregnant with twin girls according to GLOBE.

Camilla Parker-Bowles must be absolutely furious – putting up with Prince Charles all these years for nothing!

That’s what a source told GLOBE! Yes, Kate Middleton is pregnant again and Queen Elizabeth is thrilled and now feels it is safe to step away from the thrown and let William and Kate take over as King and Queen. Kate has won the crown from Camilla Parker-Bowles!

Speculation that Queen Elizabeth will soon retire has been going on for years. Kate has been pregnant either with one baby or twins ever couple of months since Princess Charlotte was born in May 2015.

A Royal insider revealed to the GLOBE that following all the pomp and circumstance of Queen Elizabeth’s 90th birthday celebration “William’s weary grandmother went into semi-retirement and handed off her duties to Kate.”

Here’s more of what this source had to say about Queen Elizabeth’s decision to abdicate and turn the monarchy over to the Duke and Duchess of Cambridge. Queen Elizabeth pushed Kate Middleton into the spotlight at Royal Ascot, the horse racing gala which Kate had never attended before.

You will remember Queen Elizabeth turned over the patronage of the All-England Lawn Tennis and Croquet Club to Kate in 2015. Apparently this was Queen Elizabeth’s way of sending a “clear message to Prince Charles and his evil wife Camilla that they are OUT!”

You know, Kate deserves to be the next Queen, not that nasty old Camilla Parker-Bowles. Why? Queen Elizabeth is thrilled that Kate has assured the future of the monarchy. Isn’t that Kate’s main job – produce an heir and as spare, job done!

For some reason that makes the Kate more qualified to be Queen instead of Camilla Parker-Bowles. The Royal insider divulged that Queen Elizabeth has vowed to keep “that drunk Camilla away from the throne.” Charles and Camilla have been nothing but an embarrassment to the monarchy.

Camilla Parker-Bowles must be stumbling around Clarence House with a gin bottle ranting and raving over how unfair it is that Kate Middleton is Queen Elizabeth’s favorite. Camilla waited decades to marry Prince Charles and now Camilla will never be Queen.

Kate Middleton and Prince William adore Queen Elizabeth and are ready to do whatever is necessary. That includes assuming the roles of King and Queen years’ before expected, so be it. Return to CDL and enjoy all your Royal news and gossip right here!

Taking a closer look at a @RoyalAirForce Squirrel helicopter, which The Duke trained upon @RAFShawburyCC in 2009 pic.twitter.com/Xn1g9ocpeb