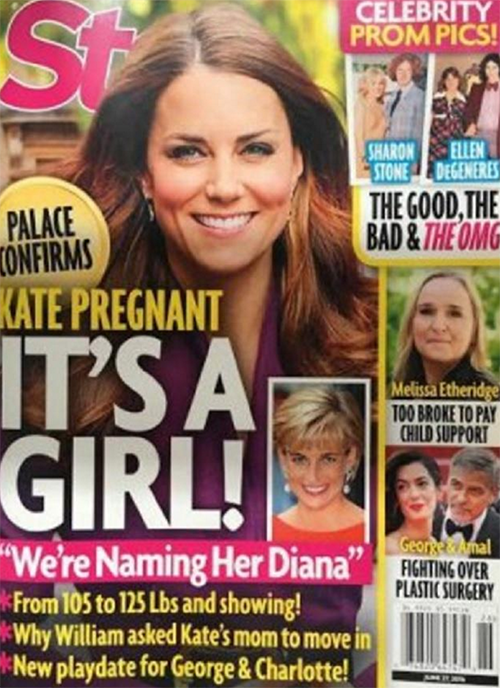 Is Prince William’s wife, Kate Middleton, pregnant with baby number three? The Duchess of Cambridge just gave birth to Prince Charlotte a year ago (on May 1, 2015), but Royal followers are certain that she will announce a third pregnancy any day now.

This week’s edition of Star Magazine features a photo of Kate Middleton, beaming from ear to ear, and the bold headline reads, “Kate Pregnant, It’s A Girl!” The tabloid’s front page goes onto tease that Prince William’s wife is “already showing” and has went from 115 pounds to 125 pounds.

Star Magazine reads, “One year after her last pregnancy, Kate is expecting again — and this time, Prince George and baby Princess Charlotte are getting a little sister!”

One of tabloid’s Royal Family insiders dished, “Kate and William agreed long ago that big families were best. They’ve always wanted at least three kids, and for them to be close in age. This latest addition couldn’t be more welcome.”

It’s been a year since Kate Middleton gave birth to Princess Charlotte, so it’s about time for a different tabloid to announce she is pregnant every week until one of them finally gets it right. Is Kate Middleton pregnant right now? It’s definitely possible – but unlikely. We all know about Kate’s severe morning sickness. The Duchess has been doing back-to-back events and smiling in photo-ops left and right. Let’s be honest, if she were truly pregnant right now, she would be on bed-rest or even laid up at a hospital.

We can tell you that if/when Will and Kate have another baby girl, the odds of them naming her after Princess Diana are slim to none. If they were going to honor Prince William’s late mother, they probably would have done that when Charlotte was born.

What do you think about Kate Middleton pregnant with baby number three? If she ever does have another baby girl, do you think that they will name her after Princess Diana? Share your thoughts in the comments below!