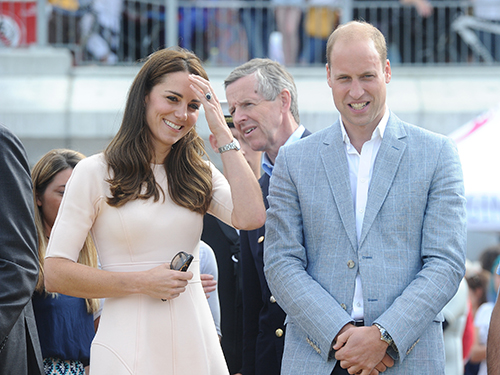 Kate Middleton and Prince William will probably wind up their summer in Scotland spending time at Balmoral with Prince George and Princess Charlotte. Queen Elizabeth is enjoying the last days of the summer with the Royal Family gathered around.

Is Queen Elizabeth using the family summer holiday at Balmoral as an opportunity to chastise Kate for the commoner behavior displayed during the Cambridge’s recent official Royal visits?

An etiquette expert publicly criticized the couple’s childish and commoner antics during the Duke and Duchess of Cambridge’s recent trip to Cornwall and the Isles of Scilly. This most likely did not sit well with Queen Elizabeth, who expects the Royals, young and old, to behave appropriately during official functions.

Prince William and Kate Middleton are trying too hard to carry on the example set by Princess Diana, who broke down the façade of the stuffy, entitled Royal mentality. Would Diana be embarrassed or proud of her son and daughter-in-law for their attempts at approachability?

Unfortunately, Kate and William haven’t been able to achieve Diana’s truly caring nature. Kate often looks bored at events for charities which she champions. The same could be said about Prince William, who often seems socially awkward when speaking with everyday working class men and women and their families.

Kate and William certainly can be sincere, warm, and caring toward their future Royal subjects, but the Cambridge’s have been unbelievably rude and snobbish lately.

Camilla Parker-Bowles has been on her best behavior for months now while Kate Middleton has received nothing but criticism. From Kate’s clothes to her hair to her lazy work-shy ways, the Duchess of Cambridge is a Royal disaster.

Prince Charles has been toiling away fulfilling his Royal responsibilities and making his gardens at Highgrove child-friendly for Prince George and Princess Charlotte. All the while, Prince William has become lazy and complacent, taking on the Royal engagements which are absolutely necessary for him to attend.

Has Queen Elizabeth had enough? It’s time for Queen Elizabeth to set Kate Middleton and Prince William straight before the Cambridge’s head off to Western Canada with Prince George and Princess Charlotte in October.