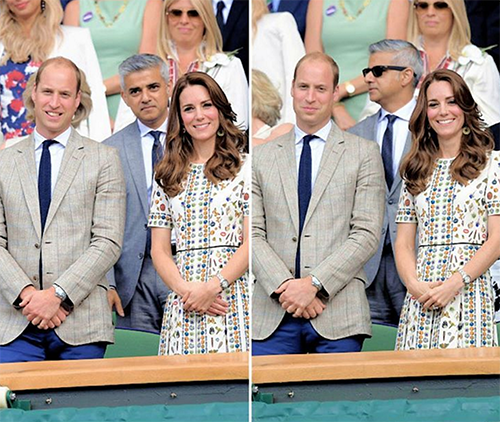 Is Kate Middleton draining Queen Elizabeth’s royal funds with her expensive fashion tastes? There’s no denying that Kate Middleton is the world’s most photographed and talked about royal. Even though she hasn’t managed to win the public over the same way her late mother-in-law Princess Diana did before she was tragically killed, the Duchess of Cambridge still manages to make waves with everything she does or wears.

While she’s definitely gotten plenty of raves for her perfect and polished style, some critics think that she might be going a little too overboard on some of the expensive frocks she’s been wearing while out and about with her husband, Prince William. Just this weekend, the mother-of-two wore an expensive £2,300 ($3,000) Alexander McQueen print dress from the late designer’s pre-fall 2016 collection.

Even though she’s gotten rave reviews for the dress, critics can’t help but wonder what Queen Elizabeth thinks about the pricey purchase, given the fact that Buckingham Palace has been dealing with some serious financial issues lately.

Kate might seem to be losing her “sensitivity chip,” as she seems to be oblivious to reports of how the Queen is trying to cut back on the monarchy’s bills. While Queen Elizabeth has managed to be reasonable with her money, including take the train to sites of her public appearances, Kate insists on spending a whopping $5,000 for a private helicopter to get her to where she needs to go. And this latest purchase surely isn’t going to fly over well with her husband’s grandmother.

Sure, Kate Middleton deserves to look her best whenever she’s in public, and especially at an important event like the Wimbledon finals. But, did she really have to purchase an expensive $3,000 dress to watch a tennis game? Perhaps not, but this again will up the ongoing debate of why the British taxpayers have to pay so much money to help fund the Duke and Duchess of Cambridge’s lavish lifestyle when they, in return, have done very little in the last several years.

Kate Middleton has recycled plenty of her dresses in the past, so why the need to buy such a spendy dress for a the tennis match? Tell us what you think in our comments section below.