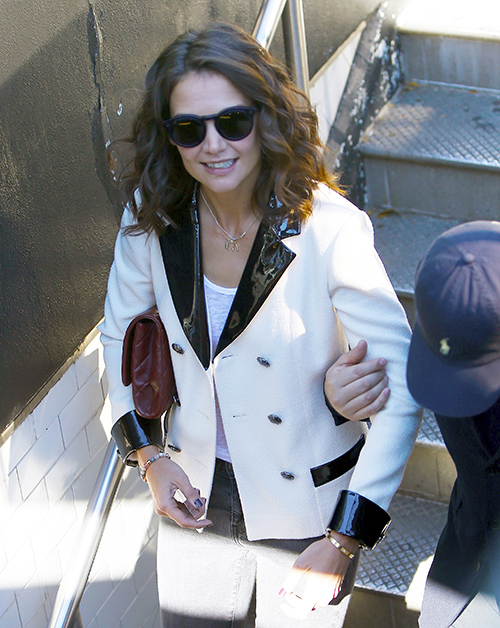 Katie Holmes is secretly engaged to Jamie Foxx? Did Katie ask Tom Cruise’s permission to marry Jamie, Tom’s former Collateral co-star? It doesn’t appear as if old buddy Jamie asked Tom’s permission to marry Katie! That could be a big problem. An insider recently revealed to OK! that Cruise was fuming mad when the actor found out that Foxx presented Holmes with a ring and asked the actress to marry him.

Jamie and Katie as a couple is old news – the pair has become experts at eluding the cameras. In the past, there have been alleged sightings of the disguised duo enjoying private rendezvous. Reps for both actors repeatedly issue denials that Holmes and Foxx are an item.

The Cruise-Holmes marriage ended four years ago. Why would Tom have any say whatsoever in whom Katie can and cannot date or marry? How long does Tom Cruise go between visits with his daughter?

Informants say Katie was very hesitant to let Tom know anything at all for fear the Hollywood heavyweight would blow a gasket. “It was Katie’s number one concern, not rubbing her relationship with Jamie in Tom’s face.” A source close to Katie divulged that both Jamie Foxx and Katie Holmes have let “their inner circles know they’re ready to tie the knot.” And apparently Tom Cruise!

Someone close to Tom revealed the actor was “irritated that Jamie didn’t ask him [if he could marry Katie] first.” Apparently, Tom got over the irritation when Katie guaranteed Tom that the relationship with Jamie is the real deal. Jamie has reportedly bonded with Suri and all is right with the world. And Tom has given Katie and Foxx his blessing to wed!

It’s been two years since the whispers started circulating around Hollywood, and spread everywhere else, that Katie was dating Jamie. A photo of the so-called couple holding hands in Jamie’s home studio surfaced in March 2015. Even though Katie and Jamie seemed relaxed and cozy in the snapshot, Jamie continued to say Katie was just a friend.

Are Katie Holmes and Jamie Foxx engaged? Did the pair wait for Tom Cruise to bestow his permission upon them? Will Holmes and Foxx finally announce they are dating or will there just be an engagement announcement? Will Jamie be jumping on any couches shouting, “I love this woman!”?