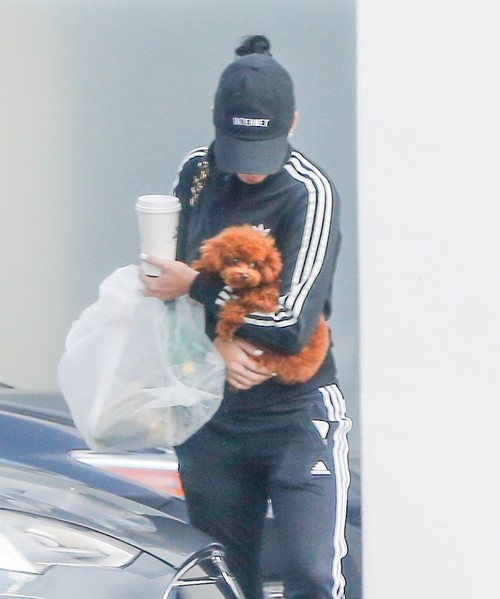 For Selena Gomez and Orlando Bloom what happens in Vegas doesn’t stay in Vegas. Katy Perry must be furious over boyfriend Orlando’s Vegas Hookup and PDA with Selena. Is Orlando cheating on Katy with Selena?

TMZ shared the intimate photos of what certainly appears to be Orlando and Selena doing a little more than hugging it out. If Selena isn’t leaning in for a kiss in one photo then what is she doing? And Orlando sure looks as if he’s copping a feel in another pic.

The photos are a little grainy and obviously taken in a dark club, but that has got to be Orlando Bloom and Selena Gomez! Or those are excellent impersonators trying to give everyone the impression that the actor is cheating on Katy Perry.

Katy and Orlando were just at a Met Gala after-party on May 2. The couple was photographed together looking happyish. Just a week later Orlando’s in Vegas enjoying some kind of hook-up with Selena Gomez?

This all allegedly went down on May 6 after Selena kicked off her Revival tour. A source told People that Selena showed up at the club around 1:00 a.m. and “headed to her VIP table to hang out with her friends and backup dancers.”

Orlando was reportedly wearing a ball cap trying to avoid being noticed at a table nearby. The insider divulged that Orlando and Selena are just friends and the actor kissed the singer on the cheek, that’s it.

A source told TMZ that Selena returned to her hotel room unaccompanied by Orlando. Was it all just some kissing and groping going on between Selena and Orlando? Selena letting loose after opening night of her tour?

Reportedly Katy was at a Ren Festival in California on Saturday. Unless Katy high-tailed it to Mandalay Bay immediately following the festival fun, Orlando’s gal pal wasn’t around to hang with the crew.

This latest Orlando Bloom and Selena Gomez sighting doesn’t do much to squash the speculation that Orlando has been cheating on Katy Perry for months.

Katy Perry has had an ongoing feud with Selena’s bestie Taylor Swift for a long, long time. Now Selena has her hooks into Katy’s man Orlando Bloom? Guess everyone will just need to sit back and wait to see how this one plays out.

Miranda Kerr, Orlando’s ex-wife, once allegedly had a thing with Selena’s off-again-on-again-off-again boyfriend Justin Bieber. There’s no love lost between Justin and Orlando.

Can anyone forget Justin and Orlando’s infamous fight in Ibiza? Maybe Selena is trying to make Justin Bieber jealous again and Orlando is along for the ride? Is the bonus Orlando making Katy jealous?

Singer Katy Perry was spotted recently leaving with her two dogs after being with two other friends in West Hollywood, California Orlando might be gone but at least she still has her dogs. FameFlynet