Keeping Up With The Kardashians Recap 1/3/16: Season 11 Episode 7 “Return From Paradise” 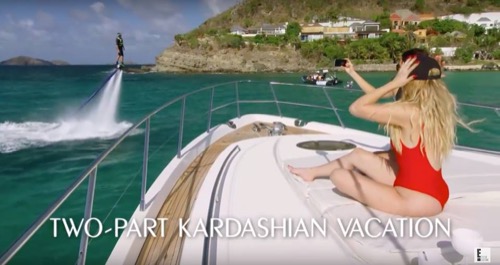 Keeping Up With The Kardashians returns tonight with an all new Sunday January 3, season 11 episode 7, called “Return From Paradise” and we have your weekly recap below. On tonight’s episode, Kendall Jenner and Kylie Jenner try to sort out their differences before their time in paradise comes to an end.

On the last episode, the family embarked on a trip to St. Barts to forget their troubles, but drama seemed to follow them to paradise. Kourtney got disturbing news about Scott; Kendall was annoyed with Kylie for bringing her boyfriend Tyga; and Kris struggled to get back on Kim’s good side. Did you watch last week’s episode? If you missed it, we have a full and detailed recap right here for you.

On tonight’s episode per the E! synopsis “Kendall and Kylie try to sort out their differences before their time in paradise comes to an end; at the same time, Kim and Khloé make it their mission to help Kourtney get her mojo back. Later, a surprise visit from Scott throws the family for a loop.”

The ladies were just finishing up their vacation on tonight’s episode of “Keeping Up with the Kardashians” but all was not well in paradise.

In fact, the only people that seemed to be enjoying their one of a kind trip were the kids. Kim had arranged for a mermaid performer to come by and swim with the little ones in the pool. So they had all been so excited about meeting a real life Ariel.

Though if you were to ask Kourtney, she would say there was a real chance that mermaids exist. She mentioned to her family that the ocean was too wide and vast to ever be fully explored. Therefore, no one can actually dismiss the myth about mermaids or prove one or another that they don’t exist. And so Kourtney continued to back up that theory even as her own mother asked her if she was on anything.

Anyways, though, Kourtney was one of the reasons her everyone else had been feeling so glum. It seems her family was worried about her and her latest obsession to stalk Scott on social media. So they had been talking about ways to cheer her up.

And while her sisters came up with an idea to arrange a photo-shoot, Mom Kris chose to actually talk to Kourtney. She talked to Kourtney about Scott and whether or not she could envision dating again. But when Kourtney said she didn’t think she would want to do that all over again – Kris then asked about Scott.

Kris asked if Scott was the one and she got Kourtney to seriously think about the question. And surprisingly Kourtney didn’t know the answer. She had been with Scott for nine years and she didn’t know if they had been together out of habit or if he was truly the one for her.

So Kris gave Kourtney some advice. She told her “keep your heart open” which doesn’t have to mean that Scott could worm himself back in. It just meant that Kourtney shouldn’t shut herself off from all the possibilities.

And once Kris had finished talking to Kourtney, she then attempted to talk to Kylie. Kylie had come on family vacation with her boyfriend but she had also ended up neglecting her sisters. Hence Kris wanted to make sure that Kylie was aware of what was happening but it turns out Kylie has a temper.

Kylie apparently doesn’t like being told she’s in the wrong so she tends to dismiss people right off the bat. And only later does she rethinks her actions.

Kris has said it, Kendall has said it, and even Tygga said it. He said Kylie needed some times to think things over and that it wasn’t until she was ready to acknowledge she was wrong that she was going to do something about it. So naturally Kylie got upset with all three of them for that and she asked them to take their discussion elsewhere.

However, just like they said, she eventually calmed down and realized how unfair she was being to Kendall. Kendall has been modelling all over the world recently and so Kylie had begun to feel like Kendall was the one to abandoned her. And the reason she invited Tygga was because she didn’t think Kendall would want to spend time with her.

But the truth was Kendall missed spending time with her family. So once she and her sister discussed their little misunderstanding, they were back to hanging out again and as a plus Tygga’s presence was no longer an imposition.

And as for Kourtney, she too began feeling better. Her sexy photo-shoot had gone off pretty well and she had a cute guy hit on her in a restaurant. So she had returned to the states with bit more confidence and unfortunately for her she ended up running into Scott at Kris’s place.

Scott it seems had wanted to talk to Kris, Kourtney, Khloe, and Kim. He said he wanted to apologize for everything he’s done and while they sympathize with his situation, it’s never easy to bury both parents, they made it clear that they were going to be needing a little more than words this time. They wanted some follow through.