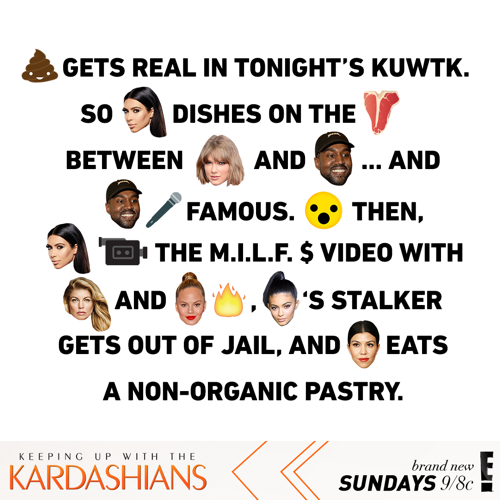 On the last episode, after the announcement of his engagement, Rob had another piece of news that would change the family forever. Did you watch last week’s episode? If you missed it, we have a full and detailed Keeping Up With The Kardashians recap right here for you.

On tonight’s episode per the E! synopsis “Kim wonders if she should take a stand for Kanye, feeling fed up that he’s misunderstood and unfairly vilified; at the same time, she gets ready to appear in Fergie’s “M.I.L.F.$” music video.”

Tonight’s episode kicks off with Kim, Khloe and Malika headed off to Vegas. Kim worries that she is making public appearances despite still having 25 pounds to lose. She discusses the negative press she has received when the press feels that she is acting in a way that is inappropriate for a new mom. The nude selfie she posted to show off her post-pregnancy body received a backlash of negative responses. She defends her pictures saying that “if you don’t like what I post, don’t look.” After getting ready, she poses for the press and gives interviews. Her public appearance at the Vegas club is met with an enthusiastic response and the girls party into the night.

Meanwhile at Kylie’s house, Kris asks her for an update on her stalker who has escaped from a local psychiatric ward. Kourtney worries that Kylie is not taking the situation seriously.

At Kris’s house, Kim braces Kris for Kanye’s upcoming music video “Famous” which features nude figures of celebrities, including Caitlyn Jenner. Kim discusses the ongoing feud between Kanye and Taylor Swift and his lyrics involving the pop star in the song. Kim says that Kanye spoke to Taylor Swift about the controversial new song and recorded their conversation. She alleges that Taylor Swift has now changed her mind and is upset about the song, despite having discussed it previously with Kanye.

Kim and Jonathan discuss her appearance in Fergie’s upcoming “M.I.L.F.$” music video. She again worries that she hasn’t lost her baby weight. Kourtney and Khloe call Kim to discuss Kylie’s stalker. They worry that her large social media presence, coupled with her habit of posting her exact location online, is putting her in danger. The girls decide to prank her in order to make her take the situation seriously.

Kanye’s publicist calls Kim to tell her that there is an audio recording of Kanye ranting about Taylor Swift. Kim tells Kanye who is undisturbed by the news. Kim decides to coordinate with their team to get advice on how best to handle the situation.

Kim meets with B. Auckerland, the stylist for Fergie’s new video. She tells her the vision for the video is to display mothers as powerful and sexy.

Kourtney and Khloe put their plan into action in hopes of convincing Kylie to take her security more seriously. After leaving a health food store, Kylie discovers her car is covered in balloons with her face on them. Kylie is angry at her sisters for the prank.

Khloe and Kourtney get ready for an event while Kim calls them to give an update on the Taylor Swift/ Kanye controversy. Khloe weighs in on the situation, saying that Kanye is treated unfairly.

The girls work out with their personal trainer. Kim continues to worry about her weight loss progress with Fergie’s new video looming. Kris speaks to Kourtney about the situation with Kylie, expressing her concerns that Kylie is upset and suggesting that there was a better way to speak to her about the situation. Kim explains the music video concept with Khloe and shares her body image worries with her. On set of the music video, Kanye checks in and gives Kim styling advice.

Kim discusses her shoot and interview with GQ magazine. The reporter asked her questions about Rob and Blac Chyna, O.J. Simpson and her feelings about Kanye talking about sex with other women. Kim says that Taylor Swift is “playing the victim” and that she has had it with people blatantly dissing her husband.

Kourtney apologizes to Kylie about the prank but reiterates that she is afraid Kylie is not taking the stalker situation seriously. Kylie explains that she is taking the stalker seriously but refuses to let the situation prevent her from living her life. Kim tells Kris about the GQ magazine article. Kris advises Kim to call Taylor Swift and work through the controversy, but Kim decides to deal with it her own way.