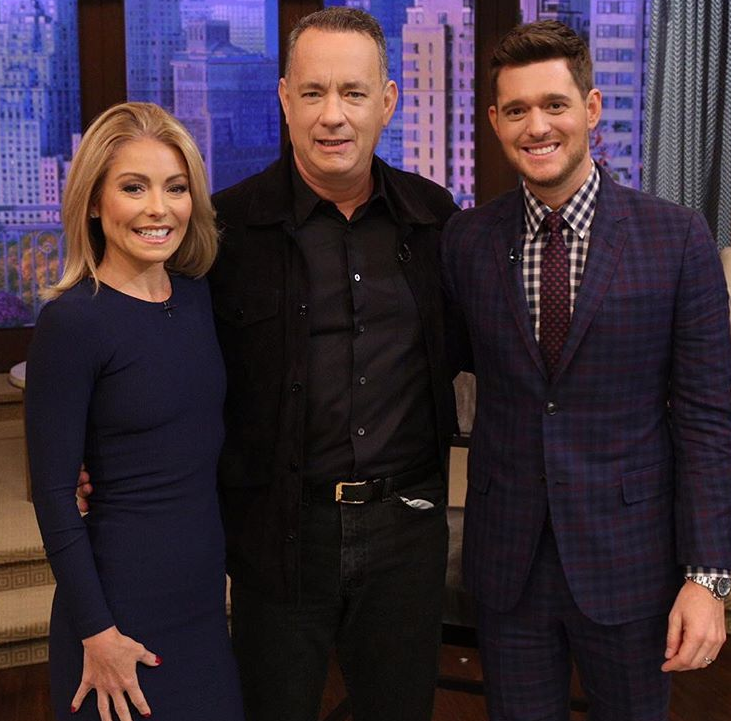 Is Michael Buble risking his career and reputation for an opportunity to sit by Kelly Ripa’s side everyday as her new co-host at ‘Live!’. That’s what fans can’t help but wonder as the Canadian crooner recently admitted that he would jump at the opportunity to work with Kelly, despite all the drama than went down between her and her former co-host Michael Strahan earlier this year.

When asked if he would take the job, Michael told Andy Cohen on ‘Watch What Happens Live,’ this past week, “Yes, I would for sure,” adding that Kelly was great to work with by further explaining, “She has such command of what she’s doing and she’s so kind with that audience. The audience is almost like a co-host for her. Listen, I just think she’s awesome.”

Surely, Michael Buble has to know that Kelly Ripa’s reputation took a huge blow after she was so nasty and so vindictive towards Michael Strahan before his departure that he had to leave the show several weeks earlier. Things got ugly when Kelly – who obviously has a very spiteful and jealous nature – brought up his personal matters and his past divorces in front of the cameras in a bid to humiliate him.

Does Michael want the same thing to happen to him, should his relationship go sour with Kelly? Does he want to risk his reputation by working with someone so unpopular and unliked as Kelly? With all that being said, Michael Buble has a successful international career as one of the top artists in the world.

Surely, Kelly wouldn’t feel comfortable sitting in Michael’s shadow because there’s no doubt that his hardcore fans would support him in his new gig. But as far as Kelly is concerned, she is the star of the show and there’s no way any co-host could steal the spotlight away from her. She would do anything in her power to not let that happen.

Do you think Michael Buble should stay away from Kelly Ripa and ‘Live!’ or do you think he would be a good fit to take over Michael Strahan? While there’s no doubt that he pull audiences in and help boost television ratings, ‘Live!’ might not be the right show for him to make the move from the stage to the television studio. Do you agree? Also, check back with CDL for all the latest news on Kelly Ripa.