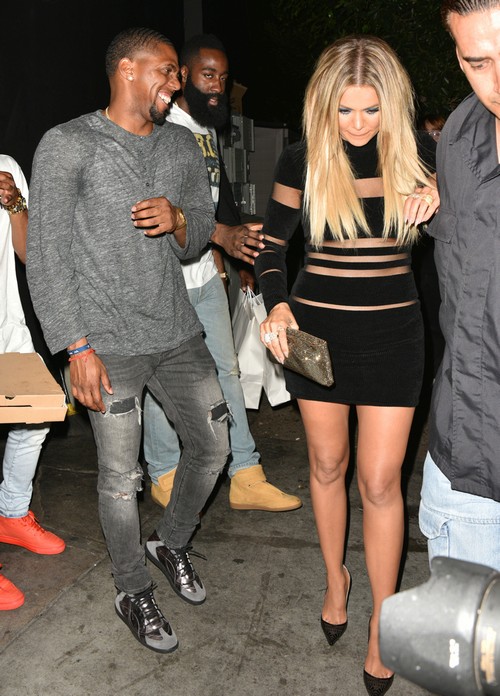 Khloe Kardashian and James Harden relationship troubles surface after strip club incident? Khloe Kardashian seems bound and determined to pick the “wrong” guy over and over, now doesn’t she?

TMZ reported that Khloe Kardashian’s current (for now) boyfriend, James Harden was seen at Ace of Diamonds strip club in Los Angeles at around 1:45 am on January 18.

The New York Daily News reported that James Harden happened to be in the company of Chris Brown, Scott Disick, and Kylie Jenner’s most recent snafu, Tyga. Yeah…. great group of winners there…. yikes. Would you take any of them home to meet your mom? Yeah, me either.

It looks like James Harden and his ‘indiscretion’ has left Khloe Kardashian feeling broken-hearted all over again. She took to her Instagram page to share the hurt following the report, where she posted a quote which says, ‘Stay away from people who make you feel like you are hard to love.’

She captioned the quote with these pain stricken words, “Never compromise the way you desire to be loved. We all should require and demand a certain type of love and that’s for us to choose in any realm. Don’t lose yourself in lowering your standards to make someone else comfortable in love. Search for a love that’s equal. You ARE deserving of equal love!!”

Could these words mean that she will be giving James Harden the official ‘boot’? Hopefully Khloe will raise her standards and find the kind of guy she’s always been looking for. She should definitely stop settling for this garbage.

Khloe Kardashian is on the rise! With her new show, Kocktails with Khloe and of course the entire Kardashian empire at her fingertips, she has no need for settling for second rate men.

One great thing Khloe has going right now, is her show. That is very distracting and will hopefully help keep her busy enough to realize she doesn’t have time to deal with another cheater in her life, and then she could cut all ties with James Harden and call it good. Khloe would probably find it very empowering to be free of the needless drama the bad boys have brought her thus far.

Stay tuned to CDL for all of the latest on Khloe Kardashian as well as her entire family, there always a lot to tell!

Chris Brown and reality star Scott Disick leave 1OAK Nightclub together in West Hollywood, California on January 19, 2016. The unlikely friends have been bonding over the last couple of months, include a visit to a strip club the night before. FameFlynet

Never compromise the way you desire to be loved. We all should require and demand a certain type of love and that’s for us to choose in any realm. Don’t lose yourself in lowering your standards to make someone else comfortable in love. Search for a love that’s equal. You ARE deserving of equal love!! 💜💜💜