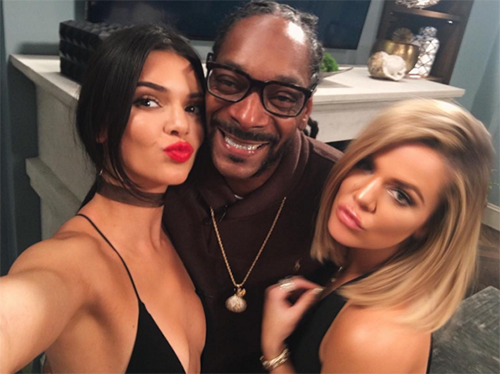 In case you missed it: Back when Bruce Jenner came out to the world as Caitlyn Jenner on the cover of Vanity Fair, Snoop Dogg took a little jab that sparked some serious heat over the social media world. Snoop Dogg posted, “Shout out to Akon! He is about to supply 600 million africans with solar power. Im really upset that this isnt major news but that science project bruce jenner is #Society”

Um yeah. He had to know that his comment would garner him a lot of heat. But, on the other hand, I have to agree with Akon not getting enough press regarding his good works. Khloe has had her fair share of beefs with Caitlyn herself, so I doubt she’s ready to judge her buddy, Snoop Dogg.

Khloe is very excited for her show, Kocktails with Khloe, to premiere on January 20. She shared the photo above with the caption on her Instagram, “Got Uncle @snoopdogg on #KocktailsWithKhloe This weds on FYI.”

Who else will she have in store for us on the show? She had confessed to E!, “I mean I love Beyoncé who doesn’t? I don’t know if she drinks though, I wanna get someone a little loose. But I mean Rihanna’s fun and Rihanna will drink I feel like, we could do some shots.”

Khloe does have a good point there. This is about having drinks and spilling the beans. Khloe is a smart girl and if she plays her cards right, she is going to come out of this with some seriously funny stuff.

Who’s looking forward to the show? Tune into FYI for Kocktails with Khloe for all the drunken fun one can handle.