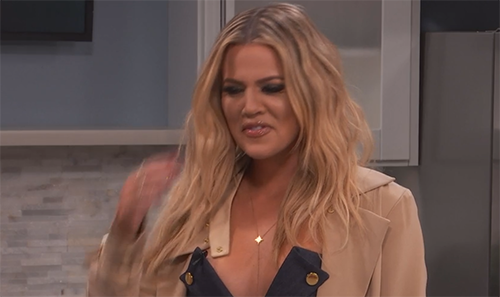 Khloe Kardashian drops a major Truth Bomb on an episode of her Kocktails with Khloe – her flopping talk show – when she reveals James Harden cheated on her! The Keeping up with the Kardashians star claims that Hardin demanded that they try to make their relationship into something exclusive; however, as it turns out, he wasn’t listening to much of what was coming out of his own mouth. He mustn’t have understood the words. After urging them to be monogamous, he was allegedly cheating on Khloe with a side-boo while living in Houston!

Now, here’s the thing: Khloe reveals that she didn’t even need James to be exclusive in the first place, as she understands the realities of living far apart. For that reason, KoKo was totally fine with them seeing other people and dating casually. But Harden reportedly pushed and pushed and pushed for them to be exclusive…and when she discovered he was gobbling up his own words and doing as he pleased, with women on the side, that’s when she decided to put an end to their relationship (or whatever it was they had going on).

On her show, Khloe dishes to Lisa Rinna and the crew: “I just don’t want to put up with people that you want to be monogamous and then you’re not monogamous. I’ve always said, it’s long distance, we don’t need to be monogamous. There’s a lot of sh*t going on in both of our lives. You live in Houston, I live in LA. Like, let’s see each other when we see each other. What girl says that? Why wouldn’t you say, ‘Ok, that’s great.’ No, instead forcing a relationship by ‘let’s be committed, let’s be committed.’ He wanted that. I wanted that but I wanted to be realistic.”

After some more banter, she concludes with, “It’s literally everything on a platter. I’m not telling you I’m not going to hang out with you … So I was like, great, this guy is in it for the long haul, let’s do it. Found out he wasn’t and I got the receipts to prove it.”

What do you make of this Kocktail exchange? Let us know what you think in the comments section below and don’t forget to keep checking CDL for all your Kardashian news!