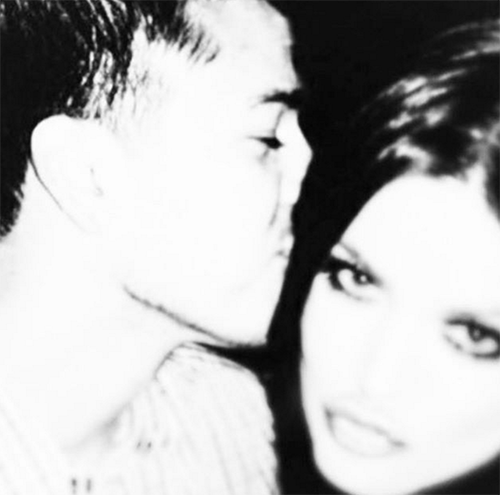 Khloe Kardashian misses her little brother Rob Kardashian SO much guys! Yeah, we aren’t entirely buying it either. Khloe took to Instagram on Thursday, February 18 and posted a very old picture of her brother Rob planting a kiss on her cheek when they were much younger. Khloe captioned the photo, “It’s simple … I miss you.”

As you all know, Khloe took Rob under her wing and let him move in with her when he began spiraling out of control and gaining weight and battling depression, all while allegedly using drugs. Eventually, Khloe joined forces with Kris Jenner and Kim Kardashian and began trying to bully Rob in to losing weight and getting himself together.

Khloe was in the process of kicking Rob out of her house because she was tired of him “partying with hoes” and destroying the place when she was away, when Rob began dating his sisters’ rival Blac Chyna. For a brief time period, Rob had his own apartment, now he is reportedly living with Blac Chyna and her son (by Tyga), King Cairo.

Now, all of a sudden, Khloe Kardashian misses her brother Rob Kardashian? It’s kind of funny that she treated him like crap and kicked him out and turned her back on him. But, now that he is finally happy again, losing weight, and appears to be getting his life together, Khloe misses him? You don’t get to dodge a bullet and not deal with your brother when he is a hot mess, and then swoop in and be his BFF again after he gets his life together.

The Kardashians, Khloe included, all turned their backs on Rob and were ashamed of him. Now that he is happy and healthy again, Khloe misses him. Do you guys think that Rob will forgive his evil family anytime soon? Do they deserve the cold shoulder that he has been giving them, or is he being immature? Let us know what you think in the comments below!