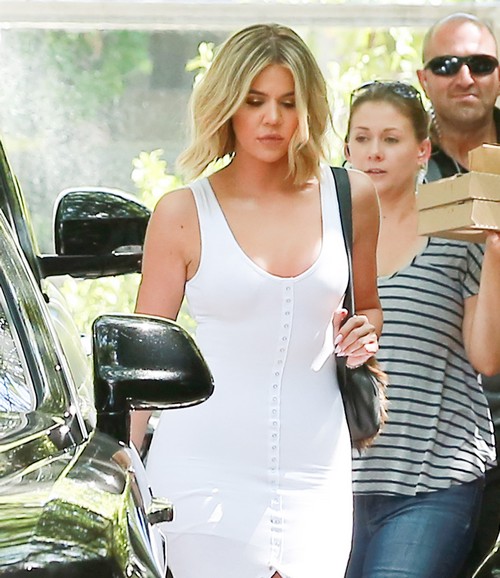 Is Amber Rose dating French Montana? Amber Rose and French were spotted partying together, and possibly wearing matching outfits over the 4th of July weekend and Khloe Kardashian must be livid. Blac Chyna’s got brother Rob Kardashian and now Khloe’s bitter rival Amber has French Montana.

Amber and rapper French Montana were photographed leaving Bootsy Bellows over the weekend, both were dressed in all white as they hopped in to a Rolls Royce together and sped off.

It’s no secret that French Montana dated Khloe Kardashian off and on since her 2014 split with Lamar Odom, he even appeared on Keeping Up With The Kardashians and a Kardashian spinoff filmed in the Hamptons. Lamar even notoriously crashed one of Khloe and French’s dates at a club and the bouncers wouldn’t let him in.

Amber and Kim have supposedly buried the hatchet, but that doesn’t mean that Amber doesn’t still have beef with little sister Khloe. And, if Khloe and Amber did call a truce, it’s safe to say that is out the window now that Amber is slinking around town with Khloe’s ex French Montana.

We’re sure Amber and French will argue that they knew each other prior to his relationship with Khloe and that their rumored hook-ups have nothing to do with the Kardashians. We may have born at night…but it wasn’t last night.

Honestly, it’s kind of hilarious and we could totally get behind an Amber Rose and French Montana pairing, there’s nothing more entertaining than Amber Rose rattling the Kardashians and giving them a dose or two of their own medicine.

What do you guys think? Is it just a coincidence that French and Amber Rose are hanging out? Or does their relationship have everything to do with Amber’s beef with Khloe Kardashian, his ex-girlfriend? Let us know what you think in the comments below!