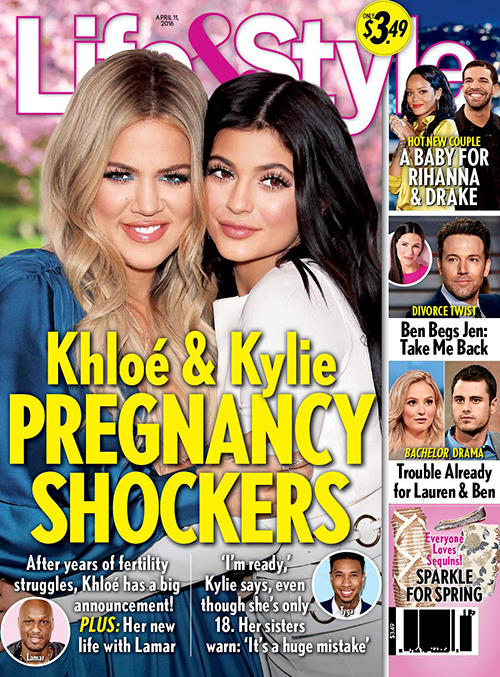 Khloe Kardashian and Kylie Jenner are BOTH pregnant, according to this week’s cover of Life & Style Magazine. Seriously, what are the odds that both sisters are expecting a baby at the same time? Extremely low – although it is worth mentioning that Kris Jenner’s kids seem to reproduce like rabbits, so stranger things have happened.

This week’s cover of Life & Style Magazine features a photo of Kylie and Khloe, and the headlines reads: “Khloe And Kylie Pregnancy Shocker!” As far as 18 year old Kylie’s pregnancy news, the cover goes on to tease that her sisters have warned her it is “a big mistake.” According to the tabloid’s sources, “She’s announced to everyone that she’s pregnant! She’s gained a little weight and says she’s been having the weirdest cravings for Roscoe’s House of Chicken and Waffles and Krispy Kreme Donuts.”

The tabloid’s entire story on Kylie Jenner is based on the fact that she referred to Tyga as her “baby daddy” in a caption on SnapChat and then quickly deleted it. We have no doubt that Tyga and Kylie have a pretty active sex life (eww). But, let’s be honest, is Kylie going to throw away millions of dollars she could make over the next decade in risqué photo shoots and modeling campaigns so that she can change diapers and play house with a newborn? It’s highly unlikely.

The odds of Khloe Kardashian being pregnant are even slimmer than her little sister seeing as how she has struggled with fertility problems in the past, but again this family never ceases to amaze us, and anything is possible. Ironically, it looks like Lamar has already fallen off the wagon after his near death overdose in 2015, so Khloe might want to think twice about starting a family with her hubby.

What do you guys think? Is Kylie Jenner really pregnant? What about Khloe? Or are both stories ridiculous? Let us know what you think in the comments below!