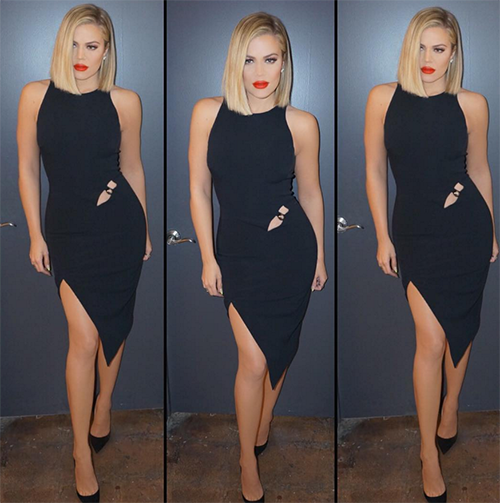 Is Kocktails with Khloe facing cancellation? Reportedly, executives demanded that Khloe Kardashian have Kim Kardashian or Kris Jenner as a guest every week. Is Khloe furious with TPTB and has refused to invite any member of the family to be a guest on the show?

The list of guests for Kocktails with Khloe has been less than impressive. The list isn’t even mediocre. Producers of the FYI network show have reportedly begged Khloe to ask Kim or Kris to be guests in order to help pull the ratings out of the dumpster.

The talk show scored fairly decent ratings when it premiered a couple of months ago. Since then it’s been in a downward spiral. Basically, the network executives want at least one of the stars of “Keeping Up with the Kardashians” as a guest each and every week.

A source spoke with Radar Online and revealed that Khloe isn’t cooperating. It’s either Khloe’s way or the highway. “[Khloe] has made it clear she does not want to rely on [Kim or Kris] to get people to watch.” Khloe wants to stand on her two feet and not depend on using Keeping Up with the Kardashians to boost ratings.

But the big bosses feel differently – people tune into see “KUWTK” drama spill over into Kocktails with Khloe. The talk show isn’t worth watching unless Kim Kardashian or Kris Jenner is essentially acting as cohost, at least that’s what the numbers show.

An insider revealed to Radar Online that “Khloe and her bosses are not seeing eye-to-eye right now.” If Khloe Kardashian doesn’t give in and agree to have Kim or Kris or even Kourtney Kardashian or Rob Kardashian as one of her guests every week will the FYI network cancel Kocktails with Khloe?

Viewers agree with the producers of the show: Khloe and the below D-list guests are boring. Khloe even had to drag out the tired old story about speculation that Robert Kardashian isn’t her biological father.

Let’s face it, people want to see and hear from Kim Kardashian and Kris Jenner because there is always some controversy swirling around them. Whether it’s Kim’s nude selfies or Kris considering weight loss surgery or Rob out and about with Blac Chyna…that’s what viewers want Khloe Kardashian to talk about on Kocktails with Khloe.