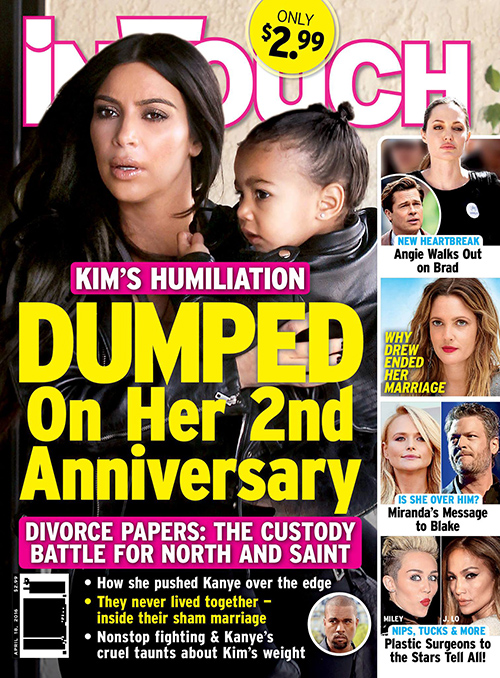 Kim Kardashian and Kanye West’s divorce isn’t official, but it’s also no secret Kim and Kanye have been flirting with a split for over a year now. The birth of their son, Saint West, actually hurt their relationship rather than helped it. Now, according to the latest cover of In Touch Magazine, Kimye is officially over and the divorce papers have been written up.

This week’s cover of In Touch Magazine features a photo of Kim Kardashian carrying daughter North West. The headline screams, “Kim’s Humiliation: Dumped on Her 2nd Anniversary!” The cover goes onto reveal, “Divorce Papers: The Custody Battle Over North And Saint.” And, of course, the tabloid alludes to Kim’s weight problem being one of the many issues in their strained relationship.

In Touch Magazine is reporting that Kim “pushed Kanye over the edge,” and he finally announced that enough was enough and decided to move forward with the divorce. Apparently, Kim and Kanye’s marriage has been nothing more than a “sham” – and they haven’t even been sharing the same bedroom.

There is no doubt in our minds that Kim and Kanye’s marriage is over – CDL has been covering their divorce and upcoming split for months. But, it’s a bit odd to think that Kanye is the one that dumped Kim. If anyone should be dumping anyone, it’s Kim that should be kicking her husband to the curb. After his financial issues, lavish spending, and erratic behavior, it’s a miracle Kim hasn’t filed for divorce yet.

As far as custody goes, choosing the primary parent for North and Saint West is like trying to choose the lesser of two evils. Kanye is certifiably crazy, but is Kim capable of loving anyone, even her children, more than she loves herself?

What do you think? Are you shocked by news of Kim and Kanye’s divorce? Who do you think will get custody of North and Saint? Share your thoughts in the comments below!