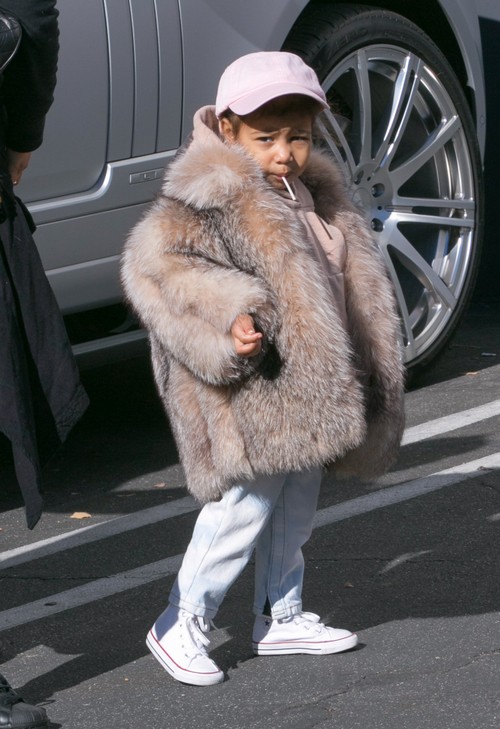 Mommies enjoy sharing photos of their children and Kim is no different. The “Keeping Up with the Kardashians” star, and Kimoji creator, shares a little too much. Way too much. One of the most recent pics of Nori that mama Kim shared has thousands in an uproar.

And one of those very upset animal-rights activists might be Khloe Kardashian.

Check out the photo of Nori clad in a fur jacket and enjoying a lollipop. The Twitter pic is simply captioned “Swag.” Yes, fur swag for a two-and-a-half year old. Followers weren’t shy about telling Kim what they thought of Nori’s fur swag.

Some of the comments? From Carol Benjamin – “That fur looked better on the animals that were killed.” How about another? From Dee – “Fur doesn’t equal swag, it equals lots of innocent animals suffering and dying. Ask Khloe about the PETA videos she viewed.”

That’s where Khloe comes in! Remember Khloe “I’d Rather Go Naked Than Wear Fur” feature? Of course in Khloe’s case, being a Kardashian woman, ‘I’d rather go naked’ would apply in general, no?

In all fairness, it is Auntie Khloe who is opposed to wearing fur, not little Nori. But nonetheless, is Khloe Kardashian furious that Kim would be so insensitive?

The Daily News contacted PETA for a comment on this latest Kim Kardashian controversy. The senior vice president for the nonprofit stated, in part, “If the fur coat that [Nori’s] been dressed in is real, animals have suffered for vanity, something that we’re sure neither North or any little girl he age would support.” The statement has most people face-palming and saying “Ya think?”

Maybe North West’s furry swag isn’t real fur? Would Kim dress the mini-fashionista in faux fur? If that coat is real, do you have any idea how much it cost? Fashion reporters reveal that the little bitty coat cost a whopping $3,500 – more money than the median American family earns in a month after taxes. For those of you who are mathematically challenged this means that 1/2 of American families earn less take-home money each month than the cost of North’s coat.

There you have it! No word yet from Kim Kardashian about whether or not North West’s coat is real fur or faux fur. Might be best if this time Kimmy K keep quiet, hide the coat in the back of Nori’s closet and forget anything ever happened.