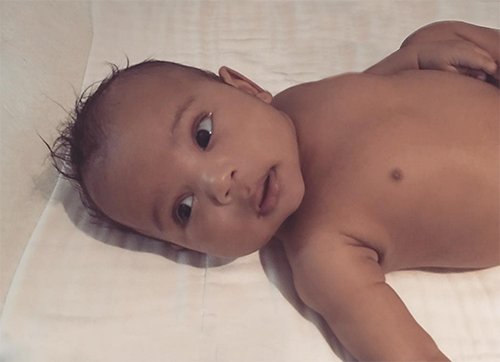 If you’re in the celeb-know, then you’re well aware of the fact that Kim Kardashian unleashed a nude selfie upon the world that received (to put it lightly) some mixed reactions. Kim responded to a lot of that hate – some of which came from other celebrities – directly on Twitter, but now she seems to be taking a less direct approach to smooth things over: Posting new pictures of her adorable child, Saint West, Instagram. As of this posting, the above image is just the second photo that Kim has shared of the adorable lil’ nugget.

Alongside the photo, Kim posted the caption, “You’re the sun in my morning babe.” Aww, how sweet. And just how desperate is she to make the world forget about her most recent fleshy endeavor? There’s probably not a bone in Kim’s body that REGRETS posting the nude; however, she’s probably not a huge fan of the negative publicity surrounding it. But, then again, since when does a Kardashian view ANY type of publicity – good or bad – as negative?

Kanye West is obviously annoying and so, too, is Kim Kardashian. But there’s simply no getting around the fact that the little humans they create are bouncy and adorable. By posting this picture, she might’ve also been trying to make up for the instance where she let North West took a nosedive into the pavement. Ouch!

Let us know what you think about the new picture of Saint West. Do you think the juxtaposition between Kim’s posting of this pic and the posting of her nude, particularly regarding the short time between the two, is interesting? Or is it all just a coincidence?