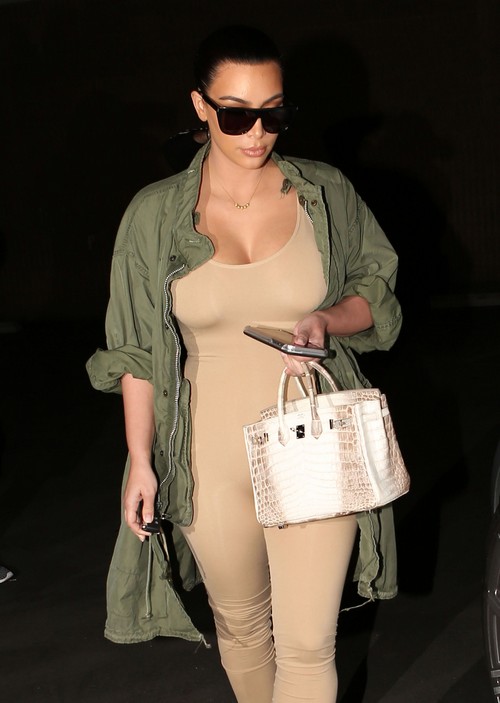 Kim Kardashian just got in a Twitter feud with Bette Midler and Chloe Moretz after they slammed her photo-shopped nude photo – and she is just as angry as her husband Yeezy. Kanye West’s crazy is apparently contagious – because his wife Kim Kardashian came down with a case of Twitter Fingers last night. Kanye West and Kim Kardashian truly belong together despite divorce rumors.

Apparently Kanye was feeling a bit under the weather this week, so Kim Kardashian took to Twitter to keep their family’s psycho reputation alive.

Kim Kardashian posted a photo-shopped nude picture on Twitter this week – not exactly groundbreaking, earth shattering news. And, like every time the reality TV star does so – the social media universe, including a few celebs, threw some major shade at her.

Bette Midler jokingly tweeted, “Kim Kardashian tweeted a nude selfie today. If Kim wants us to see a part of her we’ve never seen, She’s gonna have to swallow the camera.”

Honestly, I don’t see anything wrong with what Bette Midler had to say, if anything she hit the nail right on the head. Nobody cares about Kim being naked any more. Seriously, it has lost its effect. But, Kim was offended and posted a series of tweets slamming the iconic actress.

Kim Kardashian tweeted back to Bette, “Sorry I’m late to the party guys I was busy cashing my 80 million video game check & transferring 53 million into our joint account.” Then she added, “hey @BetteMidler I know it’s past your bedtime but if you’re still up and reading this send nudes #justkidding.”

And, finished her rant with, “hey @BetteMidler I really didn’t want to bring up how you sent me a gift awhile back trying to be a fake friend then come at me#dejavu.”

Actress Chloe Grace Moretz took a bit of a different stance – and slammed Kim for setting a horrible example for young girls and all women by making them think that their sexuality courtesy of photo-shopped nude photos is what they have to offer. Chloe Moretz tweeted, “@KimKardashian I truly hope you realize how important setting goals are for young women, teaching them we have so much more to offer than-just our bodies.”

Kim Kardashian hit Chloe Moretz with a passive aggressive insult and tweeted, “let’s all welcome @ChloeGMoretz to twitter, since no one knows who she is. your nylon cover is cute boo.”

The only one thing that Kim Kardashian had semi going for her was her lack of drama, and fake politeness. We all knew Kim was a stone cold heartless monster – but she put on a pretty good façade, and at least pretended to be nice. Apparently that has gone out the window. Kanye West must be so proud.